This Autonomous Robot is Squishibly Soft (and Nearly Indestructible)

Of all the robot apocalypse scenarios that cross your mind on any given day, who would have thought one would be a autonomous, rubbery, four-legged crawl-bot? With a design that looks more like an drunk Alien facehugger than a Darpa creation, the soft robot contains no rigid skeleton and can move all 25 inches of limbs and wires through fire, ice, a schoolyard of sugar-high children and (possibly?) a 25 megaton nuke.

Michael Tolley, Ph.D., who brought you self-folding robots and the printable robot project, has created this untethered crawler with his team at the Harvard Microrobotics Laboratory. The project is further research into flexible robotic motion and early soft-leg studies by the Whitesides Research Group of Harvard in movement through the use of air pumped into channels along body and leg.

New Scientist reports “Tolley’s robot was able to walk through a snowstorm with temperatures reaching -9 °C, withstand flames for 20 seconds, resist water and acids as well as having its limbs driven over by a car.” Not unlike myself after being coated with a thick layer of silicon. And it’s silicone rubber that makes this little guy so tough. It can take high winds, high loads and is also completely resistant to acid–you’re pretty much left with blasting it into space.

The video below shows most of the electronics and wires exposed which would make it susceptible to the elements and a well-placed kick from a 90 year old defending his hydrangea, but Tolley knows embedding the wires within its impervious shell is just a late night and an evil laugh away. Next steps for the team include adding the ability for the robot to jump, slide, climb, and grab objects (cans, rockets, your face…) while making it more suitable to navigate uneven terrain and become responsive to external stimuli. You can find out more on research in soft robotics at the Whiteside Research Group. 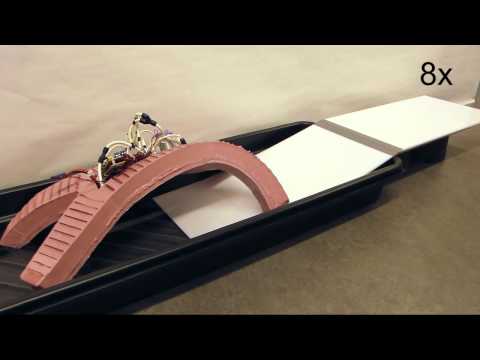