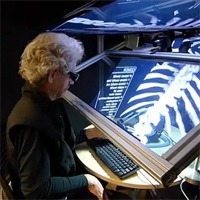 Don’t you dare touch my 3D parts! Oh. you just want to virtually touch them with haptic feedback… nope, that’s still a little out of my comfort zone.

Not so for the researchers at UC San Diego. While they’re not researching researchable research, they’re building cool tech to make it easier. In a recent adventure, they went to Wal-mart, bought a Samsung 3D TV and set it up in the lab with a mirror projecting back into the screen and a Novint haptic feedback controller. The results are a heads-ups VR display that allows direct interaction with the image.

The Heads-Up Virtual Reality device (or HUVR, pronounced ‘hover’) couples a consumer 3D HDTV panel with a half-silvered mirror to project any graphic image onto the user’s hands and/or into the space surrounding them. With his or her head position tracked to generate the correct perspective view, the user maneuvers a touch-feedback (haptic) device to interact with the generated image, literally ‘touching’ the image’s angles and contours as if it was a tangible three-dimensional object.

Of course, if this were used for 3D product development, we would first have to strap the user’s face in and properly brainwash them with bright flashes of light while feeding them corn mash through a tube… you’re right, that’ll never happen.
What’s even more interesting is how this $7,000 concoction is replace their existing $100,000 HUVR system. That’ a lot of dough that can be put back into researching wombat feces.

SolidWorks Smart Components. How To Make Them Work In Large Assemblies. 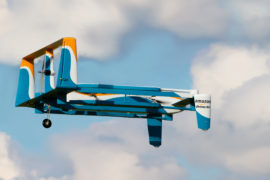 3D on the Web Heats Up