Going Old-School: Learn How to Render with Pastels in New Scott Robertson Video

Last time we checked in with master design sketcher (and even-better sketching instructor) Scott Robertson, he was releasing his second interactive design tutorial book How to Render. The book, which follows the equally-awesome design sketching book How to Draw, features what are quite possibly the most in-depth explanations of how to render sketches ever published.

The designer, whose background bounces between industrial design, character design, environment design, transportation design and concept design (phew!), has been keeping at least a couple of generations of designers busy with his popular “Draw Through” methods originally seen in his Gnomon Workshop DVDs once upon a time.

Perhaps one of the best traits of Robertson’s approach to teaching the methods of design sketching and rendering is in his keen ability to keep old media relevant for an ever-expanding community of designers who resort to their iPads and Wacoms. Although everybody has their own method for generating ideas or presenting concepts, the ability to pull out old media and communicate an idea is a skill that most designers and engineers should keep handy in their toolbox alongside their stylus’.

In this recently-released video tutorial, Robertson gives us a rundown on some old-school rendering techniques using some household items and a single black pastel. If you have 30 minutes today, it’s definitely worth a chunk of your time: 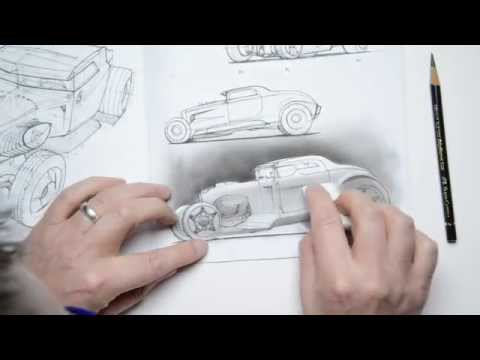 Also be sure to check out the full-book over on Amazon.

Is TDS Internet Worth the Hype?