Not everyone has buckets of money to burn on industrial-grade construction supplies. Not surprisingly, some of the most clever DIYers have figured out ways of getting the same results using simple household supplies.

Dejan Kirevski is a YouTube creator who makes various DIY projects on his Mr. DK DIY channel. He has made candle timers, jar openers out of wood hangers, and electric fans out of plastic bottles, among other things. The one constant is that all of his projects can be crafted by using easily-acquired household and construction materials.

This brick oven is no different. While you would normally need some sort of metal framework, Dejan has gone for the next best thing: a Pilates ball. 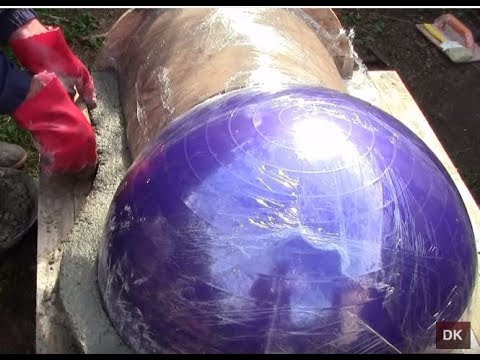 He first cuts a circular hole into a block of wood to keep the ball in place. Once finished, he uses the excess wood to craft a small tunnel and opening which serve as the entry point for the oven’s fuel and food.

After covering the Pilates ball and tunnel in plastic, he gets to crafting a mixture of sand, pebbles, and cement to make concrete for the oven itself. Covering both the circumference of the ball and the tunnel takes a number of layers of concrete on top of each other, which are smoothed later on in the process.

No one likes a pizza that tastes like ash, so a chimney has to be made by placing a small plastic tube inside a larger tube and covering the difference with cement. After cutting out the larger tube, a hole is then made using the smaller tube so air can escape the oven.

The whole oven is then covered in mesh before going through one more layer of concrete. This is also where Dejan adds in the brick red color of the oven by mixing some coloring with the final layer. The entire oven is then smoothed so as to not look like a rushed science project.

Since the Pilates ball has already served its purpose, both it, the wooden tunnel, and the plastic covering are removed to make room for a brick base. Using what looks like bricks he found in a burnt down house, Dejan makes a uniform flooring and coats it in chamotte (a ceramic raw material) before cementing it under the brick oven.

What could be more satisfying than making a brick oven yourself? Plus, it looks like the oven makes some mean pizzas.

To see more homemade marvels, Dejan’s YouTube channel, Mr. DK DIY, is where you will find them.