Ah, Jenga – the game you play when you’re tired of board games. Instead of requiring any real knowledge of a game’s rules, Jenga relies more on depth perception, an innate knowledge of physics, and very, very careful hands.

Sadly, not all of us have the dexterity to play such a game. When so much rides on taking and placing a single block, it’s only natural for anxiety to kick in. So how do you get around having butterfingers?

Why, make yourself a wooden Uzi, of course! 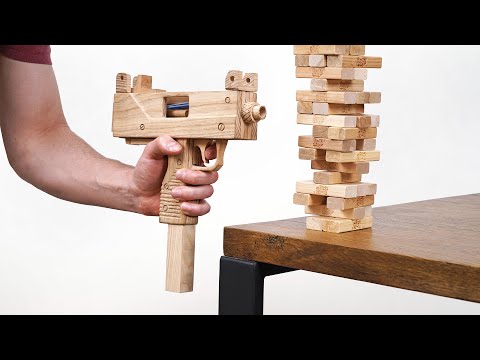 Now to be fair, the Uzi made by YouTube creator The Q doesn’t fire real bullets. In fact, it doesn’t fire anything at all.

What it does is project a peg out of the barrel. When fired, the force from the peg pushes a single block out from the Jenga tower, allowing you to retrieve and place it on top by hand.

The design is mostly inspired by images of Uzis The Q found through a quick Google search. After researching the anatomy of the Israeli submachine gun, he started working on designing and cutting the different gun parts out of wood.

The gun doesn’t use any nails or hinges to hold it together. Instead, The Q made liberal use of wooden pegs and wood glue to hold his Uzi together. In fact, the only metal part inside the gun is the spring used to activate the trigger mechanism.

The mechanism itself is quite simple. Using two stretched out rubber bands to create tension, the peg is held in place by a wooden piece. When the trigger is pulled, the piece releases the rubber bands and launches the peg forward.

With the mechanism finished, The Q worked on adding extra details to his gun. He used a drill bit and a small circular saw to carve grooves onto the grip and even added some phony screw engravings to make the gun look closer to the real thing.

The completed Uzi works just as intended. The diameter of the peg is just big enough so that a single Jenga block can be launched from the tower without disrupting the others beside it.

You still have to pick up the block you launched and place it on top of the tower, but maybe The Q will come up with another kooky machine in the future which will make that part easier.