Watch the Hypnotic Process of Manufacturing a Cassette Tape from Scratch

They may have had their heyday in the 1980s, but cassette tapes, like vinyl records, are making a huge comeback in the digital age.

While streaming music services such as Apple Music and Spotify have more monthly subscribers than ever before, there is an equally popular need for tangible, physical music, too. And unlike vinyl records, which can take six months to make and cost up to $30 for a single pressing, cassette tapes can be turned around in a matter of days and sell for less than $10. Plus, you can’t strap a record player to the side of your fanny pack quite as easily as a Walkman.

Among others who are helping recharge the cassette medium is Los Angeles-based entertainment studio Super Deluxe. With a focus on short-run product collaborations with emerging artists, it’s no wonder why the cassette tape medium, which can cost as little as $2/unit to produce, works out so well for them.

In this mini-doc, Super Deluxe takes us behind the scenes with some brilliantly simple camera work to take in the hypnotic process of manufacturing a cassette tape from scratch: 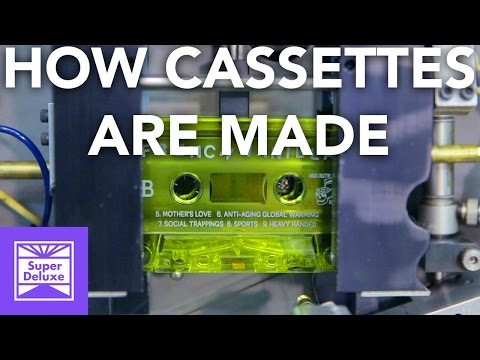