It’s always good to learn something new every day, so I figure now’s a good time to talk about the birds and the bees. Well, actually, just the bees and how people extract their goods, to be precise.

Blake of Daddykirbs Farm posts tons of videos on how he and his family have become self-sufficient in their daily farm lives. From farming to taking care of livestock, his YouTube channel covers almost everything you could think about when it comes to homesteading.

In this particular video, he shows us how he extracts honey and beeswax from the frames of his man-made beehive: 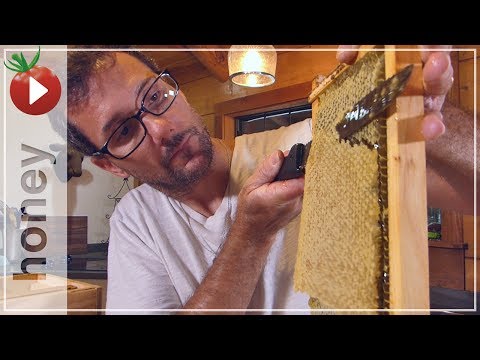 After removing the bees from their hive, Blake removes the multiple frames which store the bees’ honey and wax. He explains that the bees create these walls of honeycomb which hold the honey in place, and there are multiple ways of getting the sweet, sweet honey inside.

Normally Blake would crush and strain a few frames but thanks to a friend of his, he managed to get his hands on a honey extractor. This is also doubly good for the bees since it keeps the honeycombs intact, allowing the bees to use them again.

But before he can even place his frames into the honey extractor, Blake has to first remove the wax walls on the front of the frames which keep the honey from flowing out. He chips off the walls of wax into a container with the aid of a knife and a fork, which he can then use later to form his lump of beeswax.

Spin Out That Liquid Gold!

Once the walls have been removed, Blake carefully places the frames so the open sides face the inside walls of the honey extractor. He then cranks the handle on the side of the machine to get the frames spinning.

This application of centrifugal force ejects the honey from the frames and splashes it all over the inner walls of the extractor. The honey then falls down to the bottom, where a sieve separates the liquid gold from all the other sediments which make it impure. The pure honey flows further down the extractor, where a spout allows it to be poured out into containers.

Blake explains you don’t have to spin the extractor fast, as this doesn’t speed up the extraction process in any way. Rather, you should conserve your energy and spin the handle slowly but steadily – this is thick honey you’re working with, after all.

It would be a shame to just throw the wax out. Beeswax is a sought-after ingredient in beauty products, lip balm, and other things, after all.

Blake takes the container holding the wax walls he broke down earlier and sets it into a strainer. With the help of gravity, the excess honey will seep down into another container below while all the wax remains above.

With most of the honey removed, Blake crushes all the wax and places it into a milk carton. He then pops the milk carton into the oven, where he sets it at a low temperature – just enough for all the wax to melt.

Once the wax has solidified, he cuts open the carton and slices off the bottom portion of the hardened wax. This brown part is where all the sediments accumulate and you don’t want that in your hardened chunk of beeswax.

All in all, Blake managed to get around 4 gallons of honey from all his frames and a good slab of beeswax, as well. Is it worth cultivating bees for a whole year? That depends on how much he can sell the honey and wax for. No matter what he gets for it though, you can’t deny how satisfying it must be to produce your own honey.