Not everyone has an excessive amount of money to burn… including me. That’s why when I desperately want something fancy and expensive, I find cheaper alternatives.

That’s what I exactly did when the last of my fans at home died and saw the alluring ad of that Dyson fan. The power? Check. The price? US$650. The alternative? US$15 fan from Walmart. But is it worth it?

This led me to this helpful video. 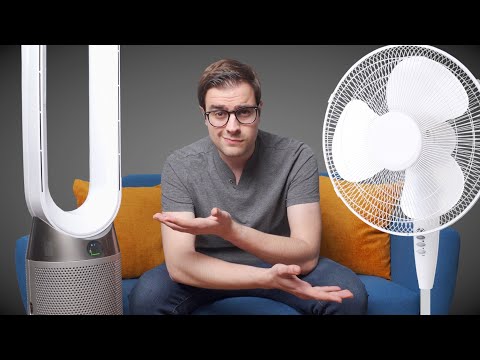 YouTuber Mark Spurrell recently bought a brand new, highly expensive US$649 Dyson Pure Cool fan. He then compared it to his old US$15 Walmart fan he picked up in the appliance aisle. By taking into account the multiple features of each fan and using an anemometer and a sound-level meter, he pitted the two fans against each other. The end results are just shocking.

Apparently, there is just no way a US$15 fan can compete with the system of a US$600 fan. Apart from the 10 speed options, the Dyson Pure Cool also comes with an air purifier which constantly checks and filters the air around it.

All of this information, from the current air speed to the amount and type of substances detected by the air purifier, is displayed on a tiny LCD screen located at the front of the fan. It even updates you on the air purifier’s filter life! To top it off, the Dyson Pure Cool can be controlled via a downloadable app on your phone or the remote control which comes with the fan.

The Walmart fan, like most ordinary standing fans, has four physical buttons which allow you to adjust the speed or turn it off. It isn’t the most complex button layout in the world, but it has served mankind well during hot summer days.

Take one look at the Dyson fan and you’ll notice a giant hole without any fan blade. That’s because unlike most fans (the Walmart fan included), Dyson’s fan blades are hidden from sight.

The blades are basically located inside the fan’s pedestal. They suck up the air and release it through these tiny slits on the side of the fan; all without any exposed blades that could harm children, pets, or a very inquisitive owner.

This all feeds into a fan’s integral purpose…

Here’s where it gets interesting. You’d think that a US$650 fan would outdo a cheap US$15 fan in all categories, but Spurrell discovered that the Walmart fan actually beats Dyson Pure Cool in terms of wind speed.

Spurrell used an anemometer to measure the fans’ maximum wind speeds at 3 ft and 6 ft distances. The result? The Walmart fan produced wind speeds of 6.5 mph and 5.1 mph, respectively; while the Dyson gave out a maximum output of 4.9 mph and 3.1 mph, respectively. With all this, you can clearly see who the winner is.

The unique designs of the two different fans would probably explain their wind speed performances. The Walmart fan prioritizes wind speed, while the Dyson highlights the aesthetics and safety.

In the end, this led the cheap fan to beat out a fan 43 times more expensive than it is in the most important category.

With all that wind power emanating from the fans, noise can be a primary concern. To figure this out, Spurrell used a sound-level meter to measure the noise each fan could make on different power levels at a 3ft distance.

Producing 56.3 decibels at maximum power, the Dyson fan appeared louder than the Walmart fan which only reached 45.4 decibels.

As long as you won’t be pushing your fans to their maximum speed all the time, this won’t be a problem. However, it could be a problem if you want to enjoy the full potential of the Dyson fan, given it has 10 speed levels.

So there you have it: simple, timeless design beating out expensive innovation.

While the Dyson fan definitely has its reputation due to its advanced features, it might not be worth the hundreds of US dollars if you could not enjoy it to the fullest. As Mark Spurrell wisely stated in his video, it might even be better to get a separate fan and humidifier at a cheaper sum.

So, what would I be buying? Oh, you know it.

Best Cameras for Wildlife Photography in 2021