Virtual reality or VR has improved by leaps and bounds since it was invented in 1968. The headwear has become a lot lighter, the graphics much better, and the controls way easier to navigate.

On the other hand, one thing that hasn’t changed much over the course of half a century is how people navigate in the virtual world. Up to this day, most virtual reality headsets have some sort of control mechanism (usually in the form of an analog stick) which players can use to explore virtual spaces without any real physical effort.

Enter the Kat Walk C, the first commercially available VR treadmill which actually allows you to walk in your favorite VR games. I won’t delve too deep into this treadmill’s features (you can find more info about it on the official Kat VR webpage), but just take note that this baby uses a treadmill combined with sensor-mounted shoes to translate your walking into in-game movement. 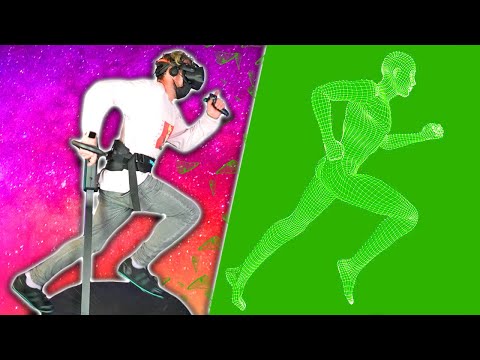 What I really want to get into is how the product feels for an actual consumer. The YouTube VR fanatic known only as ThrillSeeker recently got his hands on the US$1,400 VR treadmill, and you can bet that the man put this thing through the wringer!

Setting up the Kat Walk C both physically and on the computer was easy enough. Within 30 minutes, our man got it up and running. The hardware only occupies an area of 16.6 ft2 (1.54 m²) – meaning it can fit in almost any small room. On the other side of the coin, it weighs about 128 lbs which allows it to handle a 288-pound (130 kg) individual.

The standard version of Kat Walk C can support average bodies with heights ranging from 5”3’ – 5”10’, while the larger version is made for those lucky enough to be anywhere from 5”11’ – 6”7’.

The software is much easier to understand. It supports a ton of HMDs, including the Oculus Quest and Quest 2, the Oculus Rift and Rift S, the HTC Vice and Vive Pro, the Valve Index, WMR, Pimax, and PlayStation VR which needs an adapter. It also works with any SteamVR game which has free locomotion support, as all it does is remap the traditional inputs of an analog stick to the sensors located on the Kat Walk C shoes.

This brings us to the second most important piece in this very expensive VR set: the shoes. Apart from the sensors I mentioned earlier, these shoes come with very slippery outer soles which allow you to slide along the Kat Walk C.

Just like what ThrillSeeker said, it was more like using a “slidemill” than an actual treadmill. Instead of doing that regular walk movement, you have to allow the machine to carry some of your weight so you could slide your feet along the Kat Walk C. This will then help the floor translate your movements into usable data.

The pads on the outer soles can be swapped. With this, you can choose between a slippery or a friction-based walking experience. And should you find yourself slipping and falling, don’t worry! The harness of Kat Walk C can support your weight in any case you lose your balance.

Now for the most important part – the gaming experience. After getting used to sliding around a flat circle, ThrillSeeker explained that using the Kat Walk C felt very intuitive. You don’t have to push an analog stick to control your avatar as the machine itself is imitating your real-world actions.

In single-player games like The Elder Scrolls V: Skyrim VR or No Man’s Sky VR, this thing is a blast to play! Despite visiting some of these worlds previously using a mouse and keyboard, I want to do it all over again with the Kat Walk C. Why not? Just imagine a more immersive gaming experience that is made possible through your own actual body movements. It would probably be like literally running away from guards and trekking from one location to the next.

Sadly, the competitive multiplayer experience isn’t as great. While the Kat Walk C allows for movements such as crouching and slow walking, fighting other players in shooters like Pavlov VR is not fun. Not only are you physically exerting yourself in every match, but you’re fighting players who are using analog sticks to navigate the game. This puts you at an extreme disadvantage the longer you play as you get more tired with each match.

If you don’t mind the noise and the physical workout (and, of course, its limitations), then the Kat Walk C is a big step towards truly immersive VR. It frees up your hands quite a bit and makes you use your body in a way that actually makes sense in a game. However, for your own benefit, make sure you’re playing with others who are using the same tech when competing in a multiplayer title.

ThrillSeeker’s YouTube channel is dedicated to the world of virtual reality hardware. From gloves to headsets to really weird treadmills, his quest to find the most truly immersive VR experience is chronicled here.