It was a sad day when My Robot Nation was gobbled by 3D Systems and subsequently buried on the Cubify website. (You can find it here now: http://cubify.com/en/store/app/JOW97UI59Y.) They were onto something. It’s the first site where I sat down with my kiddos, talked bots, made bots and bought bots.

A year later, a man from Providence, Rhode Island by the name of Wayne Losey left his long career in the toy industry to create Modibots. We were ecstatic at the idea of print-your-own posable, configurable bots. They’re still available through Shapeways, but after a successful Kickstarter campaign, Wayne teamed up with Hilmar Gunnarsson, founder/CEO of Reykjavik-based Modio, to create the Modio app with an incredible UI for configuring, downloading and printing your own bot. They were onto something, as Autodesk acquired them October 2014.

However, it wasn’t until this month that Autodesk revealed the acquisition with an update of the Modio app, renaming it Tinkerplay, adding an environment set to the original Modio app and including it within the Autodesk123D product portfolio, right below Tickercad, which Autodesk acquired May 2013. With a similar look and feel even before the acquisition, the combo makes sense and I have no doubt we’ll see some cross-over between the apps in the future. 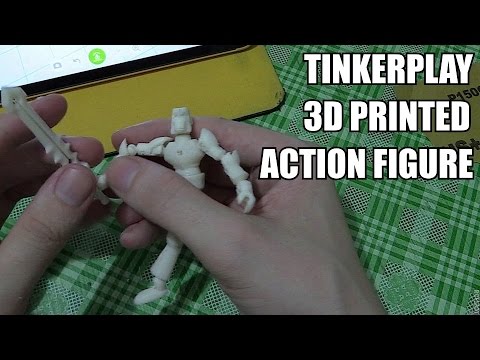 I’ll be printing some of these, but want to hear from you what has worked–what printer you’re using, materials, etc. Show us what you (or your kids) create in the comments and if you haven’t already, download the app. It’s hours of fun if you and your kids ever used My Robot Nation or have talked about how awesome it would be to make your very own toy robot. You can snag Tinkerplay for free on iOS devices, Android and even Windows and Windows phones.