As far as desk toys and “random stuff to keep around for inspiration” goes, everybody has their own tastes and preferences. While some may prefer bright and colorful vinyl toys such as those from Kidrobot on their tidy desktop, others may prefer to keep more DIY-inspired mini-projects strewn about their dusty workshop. For those looking to add a little mechanical function to their desk toy game, The Mechanical Hand just might be the perfect solution.

Designed in SolidWorks by Tom König & Bertram Illing of Germany, the hand’s design started as an entry into a GrabCAD competition over two years ago that was hosted along with SolidSmack. The competition was centered around designing a laser cut toy that was both original in its design and use of laser cutting as a method of manufacturing.

Now, after further iterating on their Mechanical Hand design, Tom and Bertram have decided to turn the hand into a sellable product that they are currently seeking funding for on Indiegogo.

For those with access to their own laser cutter and material, the Mechanical Hand can be downloaded as a DXF file and scaled+cut at their desired size, or the hand can be purchased pre-cut from wood with directions and hardware for assembly for just $25. 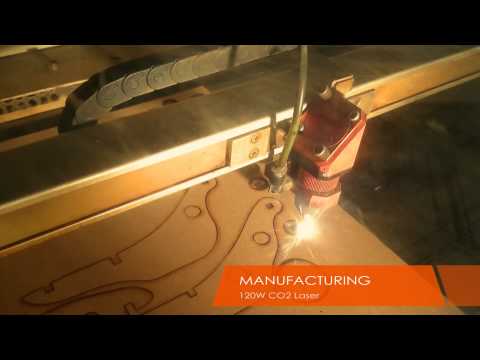 We talked more with Tom about his background in CAD, how he and Bertram approached the competition and what the design duo has in store next.

SS: Hi Tom! Who are you and what is your background?

TK: I´m 20 years old and I always had a lot of fun when building model RC-airplanes, as my father did – he somehow woke the “mechanical interest” in me.

As I finished High School, I intentionally decided to do a vocational training at an internationally-known stamping company and CNC-manufacturer and learned on their own tools, rather than study – as this was the more practical option. That doesn´t mean, that I´m only interested in doing practical things – making projects become “virtual reality” in CAD is one of the coolest things, that I´ve learned from my father, as well.

SS: Tell us more about this GrabCAD challenge and why you decided to enter?

TK: The challenge was actually, maybe nothing “special” to the GrabCAD community; but it was to me, for one reason: When I had first contact with a metal lathe and I saw, how the X- and Z-coordinates could literaly turn something into a 3D-object, that first opened my understanding in mechanical context; when you then learn to mill a part, and you see what´s possible – and you then even mix those two “worlds” – the possibilities explode! In return, combining both worlds without working on the same part on both, a lathe and a milling machine, makes it to make bigger, sensefull constructions.

That was, in my opinion, the task of the challenge. A lasercutter has only the option to cut 2D-elements with a constant thickness (not thinking of an optional 4th axis). And so, the task was to create a 3D unit from 2D parts; as short, as this explanation may be, it was very funny for us, when we had ideas after ideas, how you could fold that up!

“As it was born out of a lack of ideas, it is exactly for people that find themselves in such situations.”

SS: How did you end up deciding that a mechanical hand was the best design for the competition?

TK: That may sound like a tale, but some people have that bad habit to drum with their fingers on the table, when they are nervous/search for thoughts. Well… I count myself to those – at least, this time the strategy worked!


SS: Tell us more about the design of the hand – who is it for?

TK: As it was born out of a lack of ideas, it is exactly for people that find themselves in such situations. Maybe it can inspire someone, someday, to create something that is as cool to him as the hand is cool to us.

SS: What program was the hand designed in and tell us about the design process?

TK: The school that we visit for 1-5 days per week during our training offers free student versions of SolidWorks – so that’s the software that we used. The design process, well – in the beginning, we were struggling with everything that was not built from straight lines and hit themselves in calculatable angles. But after about a year of trying, we can now create “variable-basd” constructions, that can be easily modified – which helps a lot.

SS: How is the hand manufactured?

TK: Well, as the “spirit” of the challenge wants, about 96% of the hand can be cut in a lasercutting machine from one single plate of MDF.

Unfortunately, we noticed after the third prototype, that there is a problem, that virtually no lasercutting machine can avoid: Friction. The lasercut edges of the MDF may look fine, when speed and power of the machine are optimised. But they aren´t, when they hit each other. Therefore, aluminium spacers and washers help to reduce the friction dramatically. If enough hands are sold, we may even be able to afford a tool for injection molding the spacers from POM or other, friction-reducing plastics!

SS: Do you think you’ll expand into creating more mechanical body parts? What’s next for you guys?

TK: The project was – as mentioned – a lot of fun, but as the part with the “90°-angled-gears” showed us clearly, laser cut MDF is not ideal for angled gears. And as we both have other projects that need to be finished, this may be the first and last mechanical body part unless something magical happens. While working on the hand, we were able to establish contacts with local makerspaces and fab labs that can barely hold themselves over water. We would love to try to help others that are in the same situation we are: filled with ideas but without all of the tools and space.

Find out more about The Mechanical Hand by heading over to Indiegogo.