Making primitive huts and tools from scratch using only natural materials found in the wild is a skill that many may wish they had, but rarely ever have had the opportunity to learn. For new YouTuber Primitive Technology, making these huts and tools appear to be a part of his everyday life – and now he’s spreading the knowledge.

Since establishing his Primitive Technology YouTube channel in May of 2015, he has gathered over 5.5 million views on just seven videos – including over 3 million views alone on his ‘Building a primitive wattle and daub hut from scratch‘ video – which went viral days after being launched.

Of course, building a hut efficiently requires the use of at least one or two hand tools though – and Primitive Technology isn’t leaving us out in the cold with that one, either.

In his ‘Making A Celt Stone Axe From Scratch‘ video, PT walks us through the manufacturing process of a stone celt axe – an axe that uses a polished stone head wedged into a hole or mortise at the end of a wooden handle – using only primitive tools and materials. 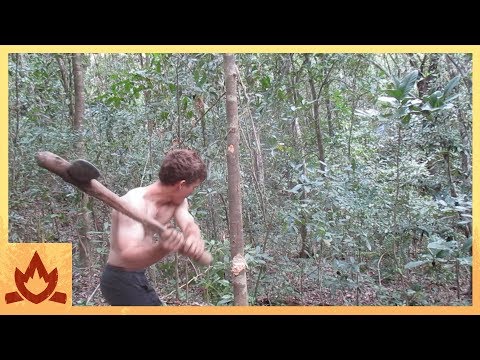 The head of the axe alone took just over a week to make due to his decision to use a particularly large piece of basalt. The process of shaping the head involved hammering, pecking, grinding and polishing repeatedly until a final shape was formed. The handle took significantly less time to create at just over a day.

“A chisel was made from stone and a mallet made from a log. These were used to cut the tree for the handle and shape it once down,” says PT. “Fire was used to harden the wood and also to help shape the mortise. The ax was then used to cut down a tree the day after the handle was a tree itself. It is a more efficient tool for felling trees than the hand ax I made and at the time of uploading this video has cut down 4 trees which I will use later.”