As if making a kitchen knife out of aluminium foil wasn’t scary enough, YouTube user kiwami japan has outdone himself by making one of the sharpest kitchen utensils out of measly cardboard (you know, the stuff you usually cut with knives). 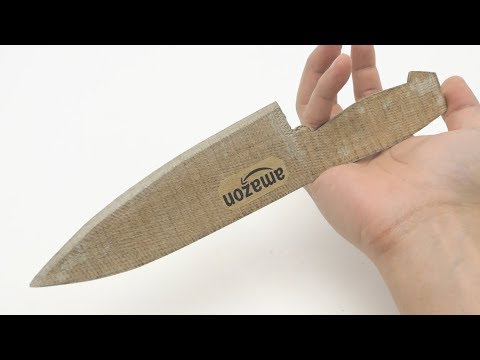 Creating a cutting tool out of a harmless material isn’t as easy as sharpening the material, as kiwami has to “cook” a couple of cardboard pieces first by soaking them in water and heating them in a cooking pan. Once finished, he takes the “broth” of the heated cardboard and uses it to soak a more substantial piece which will become the finished cardboard knife.

He flattens this large piece of cardboard using a small hammer and folds it into many layers. Using a table vise and a larger mallet, he drains the last remaining dregs from the cardboard and leaves it under a pile of bricks to dry for one week.

During this grueling wait, he takes the time to cut out a knife outline (which shouldn’t take more than a few minutes—but hey, what else are you going to do?). After the week has passed and the cardboard is nearly as hard as the pile of bricks it was pressed under, kiwami traces the outline of the knife onto the cardboard and uses a hacksaw to cut it out.

By this time, the hardened cardboard is already tough enough to puncture a hole into ordinary cardboard. But seeing as he’s aiming to make a knife and not a hole puncher, he takes one of the cardboard knife layers, flattens it using a table vise, and throws it into an oven at 100°C. This makes the material more malleable and easier to work with during the next phase.

While the majority of the knife still looks and feels like cardboard (he does add a bit of cutting board wax to make it look a little more professional), the blade itself looks and works like a real knife’s edge. It can cut through simple objects like paper and cucumbers, but regarding sharpness, it ranks relatively low compared to his other non-metallic knives (the knife made from jelly beats it out by a good four spots). Still, having a cardboard knife does come in handy when everyone else is using all the real knives.

Kiwami Japan has a whole lot more videos where he makes knives out of everyday harmless objects (in fact, majority of his YouTube channel is dedicated to the art). Be sure to check it out if ever you’re running low on kitchen utensils!