Not everybody sees a chainsaw and immediately thinks “wood cutting tool”. Thanks to pop culture, some are more likely to bring up images of Jason from Friday the 13th than a lumberjack doing his job. Well, YouTube creator ThisOldTony has the same problem – only instead of seeing fictional serial killers, he sees the ideal power source for a go-kart. 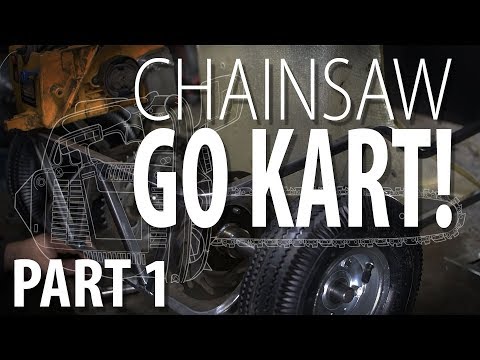 After cleaning his old 46 (or is it 42?)cc chainsaw, Tony takes it apart to retrieve the motor. With the main power source isolated, his next job is to connect the two rear go-kart wheels to the motor and build the rest of the kart around the chassis.

This is done by visiting his local bike shop and asking for some spare sprockets. The trick is to remove the chainsaw’s old sprocket and replace it with the bike’s. Once Tony has welded the new sprocket into place, he reinstalls it onto the chainsaw.

Since the cheap wheels he bought were from Amazon, Tony works on some new wheel hubs so they can support the weight of a child. After plenty of cutting, welding, and tuning, he attaches the wheels, hubs for a disc brake, and a large sprocket onto a ¾” inch drive shaft. To ensure the parts don’t move out of place, he welds them onto the shaft (which is something you should really never do—but to each their own!).

Upon deciding the go-kart will have a width of 28 inches, he takes some metal tubing and bends it to fit the go kart’s frame. The initial measurements are a bit wide, but he compensates this by welding a couple of bearing plates onto the frame.

For the upper body of the cart, Tony welds another piece metal frame slightly above the bottom frame. Using a number of metal supports, he welds the top piece at various points to keep it firmly connected to the go kart’s body. He also adds a small metal piece at the back of the top plate which holds the chainsaw motor in place.

The build is far from done, however. In totality, it takes Tony upwards of up to four videos to get the go-kart running and safe enough to hold a small child. You can find all of the succeeding videos, as well as more of his heavy-duty fabrication shenanigans, over at his YouTube channel.