Origami is an art that requites a certain level of patience, skill, and precision. Be good enough at it, and it is possible to come up with beautifully detailed complex creations – all without the use of a single drop of glue. Using the age-old technique of origami manipulation, paper engineer Erik Åberg has created the mesmerizing Ghostcube.

The Ghostcube is made up of a series of smaller cubes, all stacked up and connected to form a single, movable shape-shifting structure. The beauty of its design is that it has several configurations it can be put into and each transition into a new configuration has a very fluid effect to it, which makes even the transitional component just as visually appealing as the final cube design itself.

While the Ghostcube takes the ancient practice of origami and uses it to make modern art, Åberg takes it one step further by subdividing the individual cubes into triangles, resulting in yet more delicate visually appealing interesting configurations; the mechanics of how it works are in plain sight yet the details are so subtle that it leaves you both in awe and with at least a few questions. 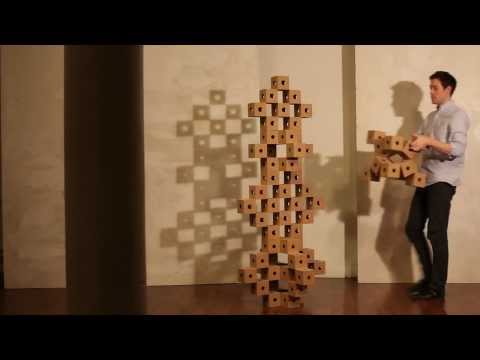 Åberg has also filmed a 23-minute documentary that goes deeper into the mechanics of Ghostcubes – including the process of making them and how the initial idea evolved.

Find out more by heading over to his website.