Hold onto your hats! The Hasso-Plattner-Institut, near Berlin, Germany, has just released ‘a simple self-contained appliance that allows teleporting inanimate physical objects across distance‘ by the name of Scotty (as in, “Beam me up“). Starting with a few Makerbot Replicators, they added a 3-axis milling machine, a camera, an encryption/tranmission system to enable teleportation of objects.

Unlike the familiar Star Trek transporters, one sees flakes and chips fly rather than sparkles when the object is dematerialized. The milling system removes a layer, which is photographed by the camera, recording the ‘slice’ and sending that to a far off machine to be fabricated. Encryption is employed to prevent others from eavesdropping on your object-based communiques. The technique appears to be real-time, rather like a phone-call, with each layer destroyed and recreated at the same time on different machines. 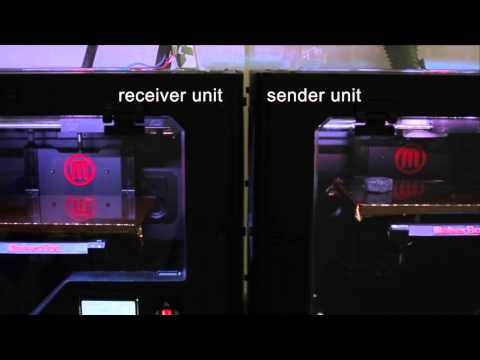 The Team behind Scotty believes that the best use for Teleportation is to help designers share unique objects without fear of copying and reduce licensing issues in the online sales of goods. Basically, this could be summed up by taking the existing digital streaming approach to physical object sharing. However, nothing can really stop others from 3D Scanning objects after they’ve been sent! We think there are other great uses.

First off, 3D Scanning is only good for digitizing the outside surfaces of an object. By destructively scanning an object layer by layer, one can see all of the internal features. This is useful for many Engineers and Designers who are reverse-engineering existing products or wanting to digitize objects they’ve created for sharing or other purposes. The secondary usage is guaranteed destruction of sensitive material during sending. I can think of a few users – Apple is perhaps one of them.

However, don’t even think that you will be able to transport yourself, or at least not until Organ 3D Printing becomes reliable. Milling a human into thin slices is easy – recreating them is harder.