Kickstarter is littered with failed projects that never made it close to their respective pledge goals and then there are those that smash through those goals within a few hours. Projects like Uniz Technology’s Slash 3D printer.

Desktop printers are becoming more affordable and with upgraded technology hobbyists, makers and professionals are able to produce projects at a more rapid rate with reduced print times. Uniz touts exactly that with the Slash, along with a larger print size, a higher resolution and faster print speed than comparable models currently on the market. With a successful Kickstarter campaign bringing in $571,926 (of a $50,000 goal), it seems Uniz has convinced many its claims are the real deal.

Uniz tells us that the Slash has a WQXGA (2560×1600) 75-μm resolution, a print area of 7.5 X 4.8 X 7.5-inch and a customizable Z-resolution profile that gives users the ability to adjust slice resolutions depending on the project. The secret behind the Slash’s print speed lies in the machine’s SLA print screen, which uses an IPS LCD platform that allows the system to be liquid-cooled directly, next the print interface, allowing it to maintain print speed without resolution degradation.

The printer has two ways for users to upload and manipulate print models with the first being an online cloud-based platform that allows for model manipulation, file sharing and even a store to sell their work. The other method is what Uniz calls a ‘touch-to-print ecosystem’ app, which allows users to connect to the printer wirelessly using a smartphone or tablet and provides all the features found on their online platform.

Though the campaign is over, those interested in purchasing the Slash 3D Printer can pre-order it for $1299 on the Uniz website. It comes with the printer, resin tank, build platform, software and 500,L bottle of resin, with an estimated delivery date of Feburary 2017. 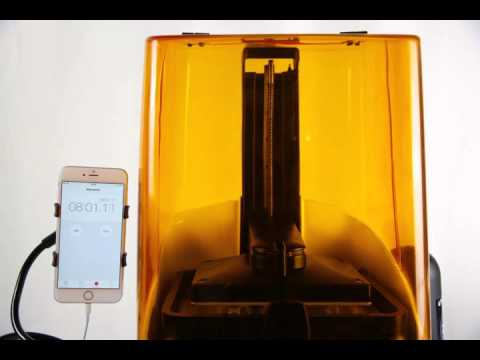