With sales of vinyl records in 2016 reaching a 25-year high (3.2 million LPs sold), it comes as little surprise that more musical artists want their albums pressed for a growing base of fans that are treasuring physical music formats once again over streaming services.

Yet, because of the downfall of vinyl in the age of cassette tapes, compact discs, and the early days of MP3, only a handful of functioning vinyl pressing factories capable of filling these new orders still exist. Thanks to ex-White Stripes frontman Jack White, however, there’s now one more place churning out copies of both vinyl classics and the sounds of tomorrow.

With the grand opening his Third Man Records pressing plant in Detroit, White is now employing 20 vinyl pressers in a 10,000 square foot facility capable of churning out 5,000 records per shift — with the capability to run 24/7 as production orders increase. 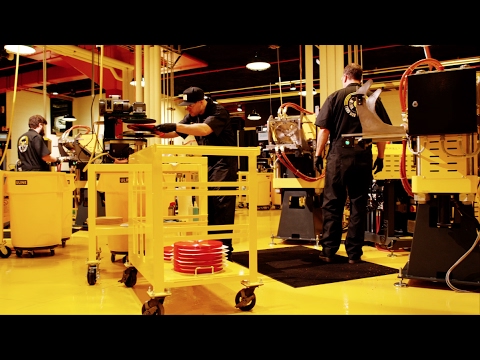 Similar to Krispy Kreme Doughnuts, the facility offers a full transparent viewing window for audiophiles (or soon-to-be audiophiles) to watch each stage of the vinyl pressing process ahead of picking up their very own copy of whatever is being pressed that day.

The modern pressing plant features eight of the first newly built presses in 35 years capable of printing 5,000 records an hour.

“Third Man Pressing brings upwards of 50 new living wage jobs with benefits into Detroit (on top of the 20 jobs already created by the Willy’s building Third Man Records location at large), and, in complement with Shinola’s recent start of production of high-end turntables, marks the triumphant return of the once-thought-lost record industry to one of the country’s great industrial AND musical cities.”

While streaming music services have no doubt made our lives infinitely easier to carry a warehouse worth of music in our pocket, it’s the tangible products of yesterday that still seal the listening experience for most.

If you’re in Detroit, you can find Third Man Records in the Cass Corridor neighborhood—coincidentally right next to where White went to high school and honed his chops on the axe.

SolidSmack Radio | The Raw and the Wicked