Distinguishing the Pillsbury Doughboy from the Michelin Man can boggle the minds of some folks. Here’s a tip, though: the former has a white chef’s hat while the latter has a body that looks like stacked white tires. Even better, here’s a restoration of a 1918 Michelin Man statuette by Marty from Awesome Restorations. This should end your confusion between these white, chunky mascots. 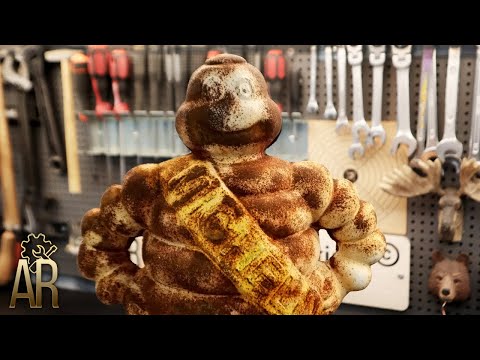 The restoration video starts with a statuette Michelin Man covered with rust. At first glance, it looks almost like a latte art drawing on the foam. Sadly though, this piece is inedible; as consuming rust would more likely get you sick than satisfy your caffeine cravings.

Marty removed the bolt holding the two halves of the statuette together, but age and rust caused the bolt to break into two pieces. However, he still managed to disassemble the Michelin Man and found out that the inside is actually hollow and just as rusty as the outside.

Getting all the rust off pushed Marty to do some hardcore sandblasting. A bit later, it turned the once white Michelin Man into a black blob. He sandblasted both halves of the statuette, as well as the tire stand which it stands upon.

Due to a century’s worth of age, there was still a lot of metal pitting visible even after the rust had been removed. To smoothen the statuette, Marty employed a mix of hand sanding (P400 sandpaper worked really well, BTW) for the surfaces and hand filing for the edges. Once he had smoothened every essential spot, he slathered on some grease remover to prepare the Michelin Man for powder coating.

Powder coating this century-old statuette makes more sense than painting it. Besides the superior color retention the process can offer, it can help it last for another century.

Powder coating cures the color to the surface it’s applied on, allowing for a stronger bond that is more resistant to wear and tear.

Marty applied white powder coating to both the inside and outside portions of the Michelin Man’s body before baking the parts in an oven at 190°C for 16 minutes. After powder had melded to the statuette, he airbrushed the sash yellow and spray painted the tire stand matte black.

Putting In the Logo and Eyes

To give the Michelin Man his iconic logo, Marty chopped up some foam strips and dipped them in black paint. He used these black paint strips to dab the letters onto the sash, letting everyone know the make and year of the statuette.

Of course, Marty didn’t forget about the Michelin Man’s beady eyes. While it might not have been on camera, I assume he used the same foam strip technique to paint the eyes.

Pop in some new bolts and there you have it: a Detroit 1918 Michelin Man statuette brought back to its former glory. Thanks to the new parts, sandblasting, and powder coating, this baby’s chances of making it through another century look better than ever!