3Devised is about to launch their new “PLUTO” desktop 3D printer on Kickstarter.

The machine is resin-powered and uses the “top-down” approach, unlike almost every other SLA-style 3D printer, which tends to illuminate (usually with lasers) through the bottom of a transparent tank. Instead, the PLUTO fires its light downwards onto the (hopefully) flat and level surface of the liquid resin.

And that light is from a DLP light engine, which is significant. This means that the entire layer is illuminated at once, making the printing much faster than having a laser trace all portions of each layer. Even better, the top down illumination means there is ZERO delay between layers.

In typical bottom-up machines, there must be a pause between layers to separate the newly solidified material from the tank itself (which also causes gradual erosion of the tank). Even in fancy systems such as Carbon, the machine must wait for new liquid resin to flow into the gap between the tank bottom and the growing object. This is NOT the case with PLUTO. It just prints continuously and should be extremely fast. Unfortunately, the company has not published any speed measurements as far as we can tell.

The print volume is quite small, although in line with high-end dental machines at 85.4 x 48 x 130mm. The machine should be able to 3D print layers as small as 0.025mm, which is quite good.

Unfortunately, since the machine isn’t launched yet we don’t have much to go on, other than their teaser video here and a few specifications: 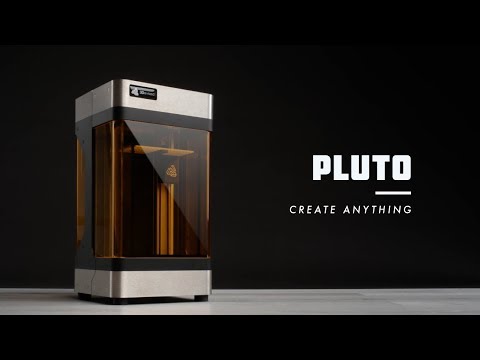 However, you can see the machine does apparently produce pretty decent quality output. This is a closeup of a dinosaur print composed of many smaller pieces.

The company has taken steps to simplify the use of the machine. First, they’ve included WiFi onboard the machine to enable you to use it without cabling or pesky SD cards. Secondly, they’ve developed their own management software, aptly named “3Deviser”, to prepare 3D models for printing and control print operations. The software is available on MacOS, Linux, and Windows.

They’ve also made available a number of different materials, such as castable, reinforced, general use, etc., to enable wider use of the machine. Interestingly, they also have an open materials capability, so you can put any UV-compatible SLA resin into this machine as well. However, you will likely have to do some tuning to get best results.

The machine itself, and I presume the software, is also open sourced, making it possible to hack the machine if you so desired. Or perhaps you’d like to make one yourself.

But that might not be necessary, as the cost of this machine is quite low at only USD$749, at least during the launch phase. That’s a pretty good price for a SLA machine, although its build volume is small.

One thing we don’t know is the viability of the company itself. It appears to be a startup, like so many others. And with a low-priced machine, they face the same risks that other 3D printing startups have had: over subscription. In far too many cases, startup companies have been thrilled to see their campaign attract countless buyers, only to realize they actually have to make all those machines. And have them all work properly.

We don’t know yet how 3Devised will fare in that regard, so we would advise readers to take a look at our Kickstarter cheat sheet when you’re inspecting their offer.