When it comes to tools for refining loose design concepts, the usual suspects – pens, paper, clay, and the occasional Bedazzler – tend to suffice. But while these tools all work fine and well, “sketching” at full scale to create room-sized objects isn’t necessarily something that comes with ease – until now at least.

Designed and engineered by a team of researchers at the Human-Computer Interaction Lab at the Hasso-Plattner-Institut in Germany, the Protopiper is a handheld ‘3D printer’ that lets users easily and quickly create full-scale wireframe prototypes for large objects.

To create the wireframe models, the Protopiper works in tandem with custom software to translate wireframe versions of CAD models into lightweight hollow plastic tubes made from adhesive tape that’s been layered and rolled. To ensure that different pieces can be joined together to create assemblies, the Protopiper automatically slices each tube with ‘wings’ for easy attaching. 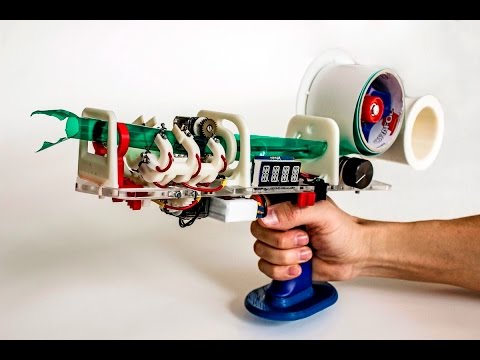 “Unfortunately, the ability of today’s hand-held physical sketching devices to work at actual scale is limited to small objects, because the underlying technology does not scale,” explains the development team. Extruding large amounts of plastic requires large amounts of power for heating and cooling and thus bigger machinery than what could be hand-held. The approach is also one to two orders of magnitude too slow for hand-held use. As a consequence, larger objects are sketched at reduced scale—without the benefits of working at actual scale.”

You can read the full report on developing full-scale wireframe prototypes by heading over to the Hasso-Plattner-Institut.