A new handheld 3D scanner is announced, and it sports a very attractive price. The new “peel 3d” is a simple-to-operate handheld 3D scanner that uses structured light to collect 3D point data on a subject. The associated software then quickly interprets the points into a usable 3D model and even provides very straightforward methods of repairing the inevitably incomplete captured 3D model. This video shows the basics of the system: 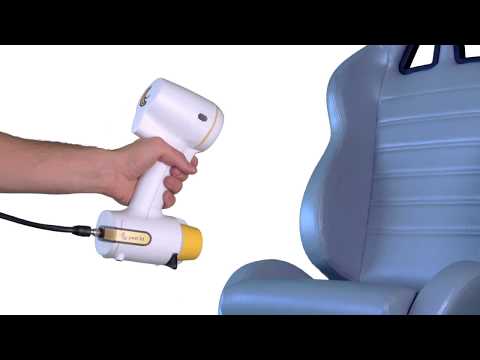 The peel 3d scanner seems to offer some interesting features, including the ability to scan flat surfaces. They explain:

This 3D scanner also can use stick-on targets to scan the flattest and smoothest of surfaces.

But normally you simply “point and shoot” as seen in the video. The structured light being used is generated by an LED system that is eye safe, unlike some other systems that employ lasers.

They also explain that the peel 3d “works with wide variety of surfaces and materials”. I’m curious about this because 3D scanners are notoriously challenged by shiny objects that mess with the reflections of the light directed at the subject.

They say it works “great” with “metal castings”. In the promotional video, they do a 3D scan on a rather shiny racing seat, and the results turn out quite well. From experience, I would expect trouble 3D scanning this item. I’d like to do some testing of the peel 3d on some very shiny objects to see how well it works. Of course, shiny objects can often be turned into non-shiny objects with various techniques, so this is not that big an issue if it is an issue at all.

It is explained that the following are not suitable for 3D scanning with the peel 3d:

These limitations are not surprising; no 3D scanner does them well.

The peel 3d boasts accuracy of 0.250mm and 0.500mm volumetric accuracy if you use stick-on guides. Base resolution is 0.500mm, which is not as good as the more expensive 3D models, but better than low-cost solutions.

After processing, the peel 3d software allows instant export of the 3D model in all the typically used file formats: .STL, .OJB, .PLY, .WRL, .DAE, .FBX, .X3D, .MA, and .ZPR. Note that although several of these formats support color textured 3D models, it appears the peel 3d device is not color capable.

The 3D scanning volume for this unit is a 3m cube, so you should be able to capture a huge variety of objects, including large items. And even if you have an object to scan that’s larger than the scan volume, like an automobile, you simply take two or more scans and paste them together afterward.

You’ll need to connect the peel 3d scanner by USB to a nearby laptop for operations, and the weight of 850g should allow for reasonable scans before your arms get tired from holding and angling the device.

The device is powered by technology from Quebec-based Creaform, a long-time manufacturer of 3D scanners, so don’t fret if you haven’t heard of peel 3d.

Now for the price: USD$5,900. Some readers may believe this price is “enormous”, but in fact, it is fantastically less than competitive handheld 3D scanners that cost in the USD$15-20K range. I’ve even seen some 3D scanners cost over USD$50K, but they offer more capabilities (greater resolution, color, etc.)

The peel 3d handheld 3D scanner is available this month.