Ah, cup noodles. What passed as fine cuisine during your college days still holds significant memories in your mind (and stomach) well after your dorm years have passed.

Quite possibly no other brand of noodles is as famous as Nissin’s – what with their iconic plastic packaging and assortment of flavors. To help immortalize these noodles without the worry of an expiration date, Bandai teamed up with Nissin last year to produce a plastic 1:1 scale replica of the classic cup noodle.

Inside the box you’ll find everything you would expect from the real, edible variant – from the plastic cup all the way to the tiny pieces of dehydrated meat and vegetables. The only difference here is eating any part of this model will result in a trip to the hospital.

You can find more about the model on Bandai’s webpage (it’s in Japanese), but I want to focus on Youtuber Gio San Pedro’s assembly of the replica. Using clever stop motion techniques captured on a really good camera and microphone, he compresses an hour of assembly into 3 minutes of pure ASMR goodness: 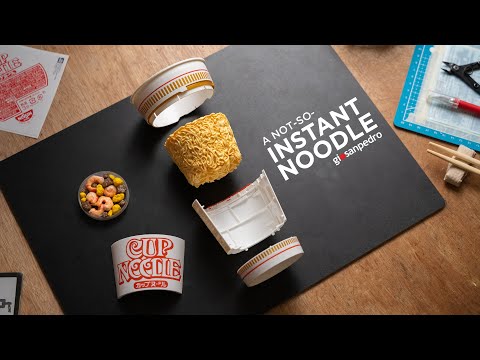 Gio covers everything about the assembly – starting with the initial unboxing and cutting out the plastic parts to removing the excess plastic and snapping the pieces together. If you’ve ever made a model toy like a plane or a Gundam before, you’ll know exactly how this process goes. But Gio adds a unique style and sound in his video that watching him create the model is just soooo satisfying.

You can see how much detail Bandai has put into making this scale model of everyone’s favorite discount food. Each letter in the “Cup Noodle” logo, for instance, is a separate piece fitted into another piece which makes it stand out from the main cup. This is exactly like the real cup noodles!

The back portion of the cup isn’t as well-detailed, however. While some of the pieces are snapped on, the nutritional facts are just a sticker that covers most of the cup.

Things get interesting once Gio start’s assembling the cup noodle ingredients. Food pieces like the dehydrated meat and shrimp have to be cut out from their plastic sprue trees (this is what you call the plastic squares and rectangles holding the parts) and trimmed before being added into the mixture.

The noodles themselves are a giant piece made up of different segments which have to be assembled together.

Once all the main parts are assembled, Gio combines them together to create the final product. As he adds the toppings into the noodles, you can get a glimpse of the plastic garnish Bandai has included to make this model look real. It’s a long stalk of green plastic which you have to cut into tiny pieces, so you can practice your culinary skills even though this isn’t an edible model.

You can barely tell this thing is plastic with the lid on top. Just to prove it, Gio momentarily takes the model off-screen and replaces it with the real thing after he mixes himself some coffee to prepare for snack time.

Gio San Pedro’s channel is dedicated to technology reviews, assembly videos, and unboxings. If you’re into any of the above, be sure to check it out!