Back in the summer of 2016, MillRight CNC burst onto the scene with their surprisingly affordable M3 desktop CNC machine ($299 for the kit)–a barebones setup which featured an MDF frame, NEMA 17 stepper motors, a modest 10.25″ x 10.25″ (260mm x 260mm) work area and powered by an Arduino Uno control board. Consequently, the company has upped their game for this year by introducing their newest desktop CNC machine, the Carve King, a kit that boasts several new upgrades over the previous M3.

Most notably, the kit is equipped with laser cut, anodized 1/4″ 6061 aluminum bearing plates, making it more robust in terms of stability as well as lead screws on all axis instead of belts for X/Y axis and while you’ll get increased precision, it will run slower on the rapids. They’ve also included an Arduino Uno pre-loaded with Grbl control firmware, so it’s ready to go straight out of the gate.

The complete spec’s for the Carve King are as follows:

So, like the M3, MillRight offers several extras at additional costs, including a DeWalt DWP611 router for $135, a router mount for $35 and 400W spindle kit for $125, which adds to the Carve King’s base price of $699. Finally, while the Carve King was released only a short time ago, the company has a ‘monster’ machine, the full metal, precision Power Route Kit, available for pre-order at $2,649. 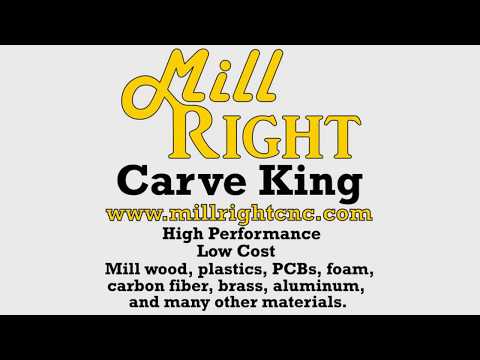