If you’ve ever visited a carnival before, you’ll likely have spent a disproportionately large amount of money for the amount of time you’ve been there. The rides are fun and all, but the carnival really burns a hole in your wallet through its unfair games.

Back in 2017, when the world wasn’t in the throes of a pandemic, Mark Rober and his friends visited a local carnival to try all the games available. Their goal: to classify each game according to their difficulty but more importantly, find the best way to win each one.

After spending a couple of days collecting data on 24 carnival games, here’s what they have discovered: 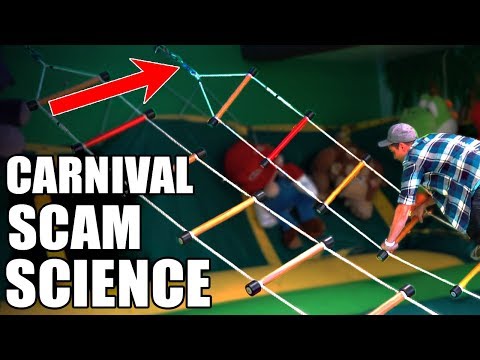 There’s more science connected to this world of wonder than you realize. Mark and his friends classified their carnival games into three categories: games that require luck, games that need a particular set of skills, and games that are made to be nearly impossible to win.

Let’s be honest – all carnival games require some form of luck or another. But there are some games – like the one where you have to toss a ball into a bunch of cups – which lean more on Lady Luck being on your side than any actual skill you can practice.

Getting the math right is pretty easy: all you have to do is divide the number of possible outcomes by the number of outcomes you can win. But even with this simple formula, Rober explains that the games are rigged to put the odds against you.

Let’s go back to the ball toss game I mentioned earlier. By providing you with lightweight balls with a high coefficient of restitution, it becomes much more difficult to win because the objects you toss are extra bouncy and they amplify the force you exert.

While this may seem like an unfair advantage for the carnies (it is), the odds of winning aren’t as bad as you think they are. With enough luck (and enough tries), you could actually win a prize from one of these games. Just make sure to calculate your win percentage before trying!

Skill games are just that – games whose odds can be tipped to your favor with certain skills. These usually involve feats of physical prowess (such as throwing a baseball or shooting a basketball), but can at times also require mental fortitude (like a memory game that isn’t rigged). You may think these games are easy once you’ve had some practice outside, but your experience could also be detrimental to whether or not you win a prize at the carnival.

Take the basketball game. Rober explains while a normal 3-pointer in basketball requires you to be 24 feet away from a 10-foot hoop, carnival games tend to increase the height and distance of their basketball hoops. In the case of the carnival they went to, the hoop was 28 feet away and 11-feet high. This change not only makes it harder for you to shoot the ball, but it also messes with your muscle memory, especially if you happen to shoot hoops on the daily.

So how do you win these types of games? Change your strategy. Once you can see how the games are set up, you can adjust the amount of force applied (and maybe even change the angle on which you approach them) to win. These skill games require just as much trial and error as the others but as your skill improves, so as your chances of winning.

Never Go for the Impossible

This brings us to the last of Rober’s classified games: the ones which you should never try. These games look deceptively easy but are impossible to beat because of the way they are built.

Taking the ladder climb game as an example, Rober explains how tying the ladder at a single point on both sides essentially makes it so you have to keep your center of gravity at that specific point at all times.

Unless you’re very good at keeping your balance, completing this game is nigh impossible. Rober even goes so far to explain how walking a tightrope would be much easier, as you can flail your arms around to adjust your weight distribution. Needless to say, you should have a ton of practice with these games somewhere else (preferably for free) before even attempting to spend money on them at a carnival.

Even when you win at any of these games however, the carnival still wins. The prizes they give out are super cheap compared to the entry cost to play the games and unless you manage to beat all the games on the first try, you’re not getting your money’s worth.

I guess people play these games to get a thrill out of the chance of winning something. But if you want to get your loved one a stuffed animal at a reasonable cost, you might want to consider just buying one in a store. You’ll save yourself a ton of money and you won’t have to weigh your chances of winning each and every time.

Mark Rober is a former NASA and Apple engineer who now uses his superpowers for good to make awesome content on his YouTube channel.