Remember the 2018 Venom movie? The one about the alien symbiote attaching itself to a badly New York-accented Matt Hardy? If not, then don’t worry; even the most die-hard fans like to forget it ever existed as well.

The movie was pretty bad, but the symbiote special effects seem to have left a lasting impression on magnet enthusiast Magnetic Games; so much so that he decided to recreate the symbiote in a video using thick slime and his powerful magnets. 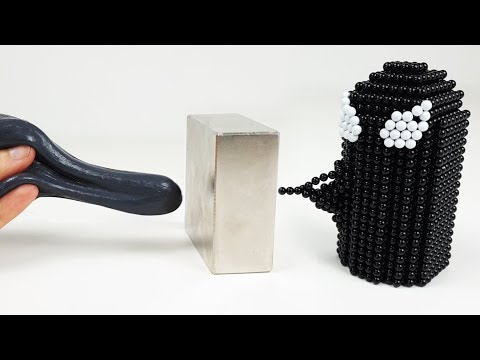 The end result is a hodgepodge of footage where the slime looks semi-solid and the magnets seem almost liquid.

The slime used by Magnetic Games is more like a putty which he wraps around a giant, 70 x 70 x 30 mm block magnet. The putty itself doesn’t have any magnetic properties, nor is it an alien symbiote. It’s actually just clever stop motion editing and a lot of pulling, pushing, and twisting to get the putty looking just right.

You wouldn’t even think this was a stop motion, with the way the putty looks almost alive as it devours the magnet whole. Magnetic Games even does some cool anti-gravity sculpting where the putty lifts itself off the ground to wrap itself around the magnet hovering above it.

The spheres rocket towards the block magnet, eating up any free real estate in an almost ravenous manner. Thanks to a slow-motion camera, you can see how the balls have their own way of feigning sentience as they scramble to connect to the much stronger magnet.

In keeping with the whole Venom aesthetic, Magnetic Games creates a small Venom mask out of black sphere magnets and pushes it towards the block magnet. Just like the drop experiment, these babies break their preformed arrangement as soon as they get within the block’s magnetic pull, wrapping themselves around the magnet’s surface.

Yet, this seems to have been just a test as Magnetic Games unveils the coup de grâce – a giant Venom mask made of magnets and putty.

The “skull” is made out of sphere magnets while the teeth are composed of rod magnets. Once the skeleton is assembled, he places a dark layer of putty over the magnets to make Venom’s skin. Add some white putty for the eyes and pink putty around the mouth for gums, and you have yourself one slimy mask which will be very difficult to clean.

I don’t envy the person who has to clean this up, but I do envy Magnetic Games YouTube channel, which is dedicated to all things magnetic.