File this under your ‘good uses for 3D printing’ stack. The Local Motors Lab Team has been actively using the MakerBot Replicator 2 3D Printer to print prototypes, scale-down versions of parts, and smaller replicated pieces. Lo and behold, one of these sample parts actually found it’s way onto the Rally Fighter as a final production part. How did the Local Motors team optimize 3D printing on a consumer-level 3D printer for a final production part? 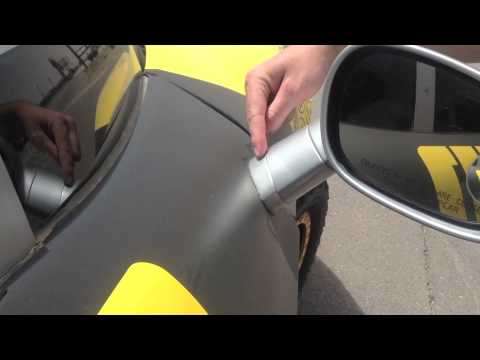 The current stock side mirrors on the Rally Fighter are slightly modified from the Dodge Challenger’s design. The modification came in the form of an integrated 1” machined mirror extension that allowed the driver’s field of view to extend around the wide body of the Rally Fighter. These 1” extensions proved to be both time consuming and expensive to produce.

Thanks to the DIY-spirit that is ultimately responsible for the entire Rally Fighter from wheels to engine, the LM Labs found a DIY solution with the $2,200 desktop 3D printer. After enough testing the team was able to print the 1” extension with the appropriate curvature and were able to fit it accurately to the existing side mirror design. After the vehicle undergoes a wrap, the extension is hidden and seamless.