Using some gallium he easily bought online, YouTube life hacker DaveHax shows just a few instances where having a quick changing metal can be useful: 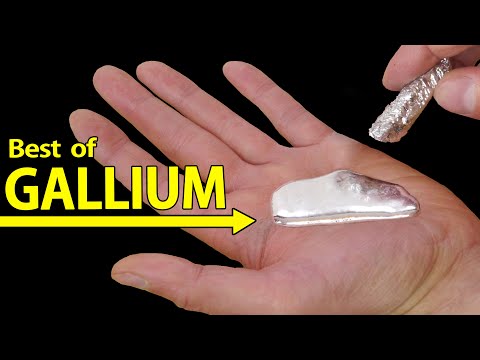 Upon receiving the gallium, it comes as a solid in a small test tube. By placing the tube in some water slightly above room temperature (you can get similar results by holding the tube in between your hands on a hot day), Dave easily melts the gallium and pours it onto his hand.

Think of gallium like metallic clay for metalworkers. You can sift and pour it safely using your bare hands, though it may leave some gray stains which can easily be removed with soap and water. Even if the metal is non-toxic by nature, you still don’t want to ingest it. This is metal after all, and not something edible you can buy at a candy store.

With his liquid gallium in a syringe, Dave proceeds to pour the metal into a couple of plastic molds. He first makes some LEGO-like figures, followed by a few blocks also in the LEGO style.

Since the gallium has liquid properties, it sets into the molds and hardens easily once it cools down. While the figures turned out pretty well (you obviously can’t move their arms), some of the bricks’ studs didn’t form properly – rendering them unconnectable.

The best part about having an easy melting metal is you can just break down your previous creations and reuse the gallium to make something else.

Dave uses the low melting point of the gallium to his advantage to create a metal candle. By piercing a hole at the tip of a candle mold and fitting a candlewick through it, he is able to pour the liquid gallium without it seeping out. Once the metal has solidified, he can remove the candle and light the wick on the other side. The metal just melts down as the candle burns, allowing Dave to collect it afterward and use it again.

You have a spiral one, a sun-shaped one (made from a plasticine clay mold using the cap of a ballpoint pen to craft the rays), and a decision-making fidget spinner just to name a few. That last one is interesting because Dave uses a mold to create the words “yes” and “no”, then places the solid gallium letters into a plasticine clay mold filled with liquid gallium.

But by far one of the most interesting properties of gallium is how it can turn aluminum into a brittle, paper-like substance. Thanks to the wonders of chemistry, gallium breaks the oxide layer of aluminum and invades its crystal lattice, turning it brittle.

Just a dash of gallium on anything aluminum can break it down faster than Michael Jackson at a dance party (which is why the element is strictly illegal on airplanes). Soda cans, metal water bottles, even tennis rackets aren’t safe from the destructive power of gallium. So while it’s fun to play with the metal in its liquid form, take note not to use it to anything aluminum.

You can find more life hacks on the DaveHax YouTube channel. They won’t always make your life easier, but they’ll always make it interesting.