While watching a 3-hour drama about a sinking ship is not everyone’s cup of tea, spending 3 hours on a LEGO Titanic set is a different story.

Just a few days ago, the Denmark-based toy company unveiled their latest and largest LEGO set yet. And just like the original ship it was based on, this one splits into three segments. 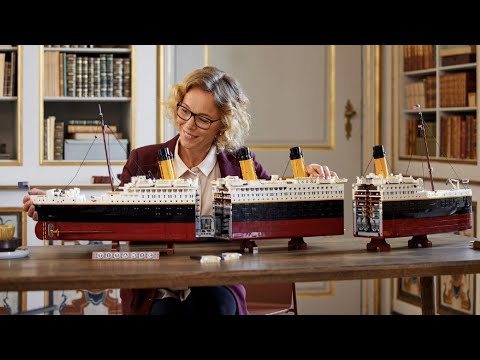 While this LEGO set isn’t quite as seaworthy as the real Titanic, it does have features that slightly justify its exorbitant US$629.99 price tag:

As I mentioned earlier, the ship can be divided into three segments. This is not to recreate the unfortunate sinking of the original Titanic, but to showcase the model’s intricate build.

When taking apart the LEGO Titanic, you’ll be able to see the areas made famous in the 1997 film. This includes the boiler room, the smoking lounge, and the grand staircase. There seems to be some sort of hierarchy when you look inside the Titanic. The boiler room and crew’s quarters are at the very bottom, while more lavish rooms and other complex features of the model can be found at its upper portion.

To make separating the ship easier, each of the three segments comes with its own stand. When combined, the LEGO Titanic has this nice three-stand frame and a name plaque to go along with it.

A good LEGO set wouldn’t be complete without its moving parts, and the LEGO Titanic is no exception.

On the outside, you have your anchor and tension lines – both of which can be adjusted manually for some light playtime. The anchor can be raised and lowered, while the tension lines can be tightened or loosened.

The interior, while not as interactive as the exterior features, has one moving feature that stands out. By spinning the ship’s propellers, you’ll be able to see the piston engines turn inside the ship itself. It’s a small touch but it shows how much attention to detail LEGO puts into its sets.

This isn’t something a typical kid can build on their own, so it comes as no surprise that the LEGO Titanic is a set aimed at those 18-year-old and up. It will be out this November 1, which is the perfect time to get yourself that early Christmas present!