Just How Much Damage Can a Tempered Glass Panel Take?

Next to epilepsy-inducing RGB lights, the biggest fad in PC building nowadays is tempered glass panels. These see-through sides (while probably not providing the best airflow to your computer) make it easy for you to have a clear view inside your rig. But even though it’s cool to look through, this is glass we’re talking about. And glass breaks. So how much damage can one tempered glass panel take before it shatters into a million pieces? 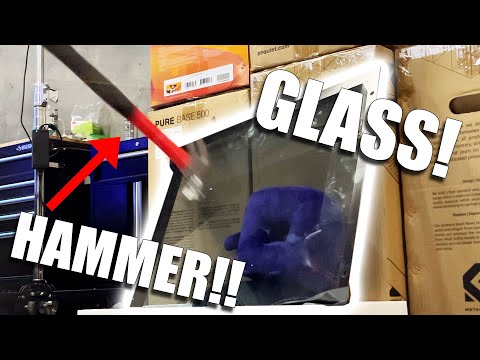 For the good of all PC owners out there, Jay and the crew from JayzTwoCents took a bunch of old tempered glass panels and “scientifically” dropped them in different ways from different heights.

Prior to breaking any of the tempered glass panels, Jay explained how tempered glass absorbs impact. He said that the material is very good at taking pressure on its face and dissipating it throughout the whole panel (yet, dropping a tempered glass panel face-first from a considerable height could cause it to break). However, absorbing impact at a single point is another thing – especially when it comes to its corners. The more focused the pressure is, the harder it will be for the tempered glass to spread it. This results in the glass not just breaking in the place it was hit, but completely shattering to pieces.

The first tempered glass panel he used was not that thick and only had some paint on the sides. After daintily dropping it on its side on carpet flooring with no damage, he started dropping the panel on its corners a few inches above the ground. With the exception of some loud resonance, the panel remained completely fine.

That was on the carpet. The real test was if the tempered glass panel could survive being dropped on solid ground. Thankfully, as it turns out, dropping the panel on its side on a flat surface is still relatively safe due to the air cushioning its fall. Should a panel accidentally fall out of its casing and onto the floor, you could easily pick it up and return it without too much damage.

Dropping a tempered glass panel on solid ground from a height, however, is a different story. The tempered glass shattered when it was dropped only a few inches above the ground and it sent shards flying everywhere. What’s interesting to note is that the glass continued to shatter even after it was already dropped but remained intact at the points where it was painted.

In keeping with the spirit of controlled experiments, Jay did another set of tests – this time with a thicker tempered glass panel. He dropped the panel at the same amount of times on carpet from the same heights. After the prior tests proved unfruitful, he began dropping the tempered glass on the solid ground.

Dropping the tempered glass panel from the ground didn’t produce any results, but the inch-height drop proved more interesting. Instead of shattering on the first drop, the more reinforced tempered glass panel actually withstood the impact. Of course, the second fall caused the glass to eventually break, but that shows us that the thickness of the glass and the amount of reinforcement are factors in the overall sturdiness of the material.

Satisfied with the results, Jay still had one more panel to mess around with. Instead of wasting the panel on the same control experiment, he and his friends decided to have a little fun and started chucking random objects at it.

Surprisingly, the tempered glass panel was able to withstand a fair amount of punishment. It survived hits from a marker, a screwdriver, and an old graphics card! It even survived the first direct hit from a hammer!

These experiments prove just how sturdy tempered glass panels are. They can tolerate breakage as long as the pressure is properly distributed along the surface during the impact. However, you still have to be careful not to drop them on the corners or apply too much pressure at a single point.

You can find more PC shenanigans over on the JayzTwoCents YouTube channel, as well as some helpful videos that can show you how computer parts are actually meant to be used.

Spimbey Is a Modular Playground That Can Fit Anywhere