As the timeless fairy tale Jack and The Beanstalk would have you know, buying stuff is cool but growing your own stuff is even cooler. Then again, growing that beanstalk led to him stealing a golden goose which led to him buying more stuff, so maybe that isn’t the best example. 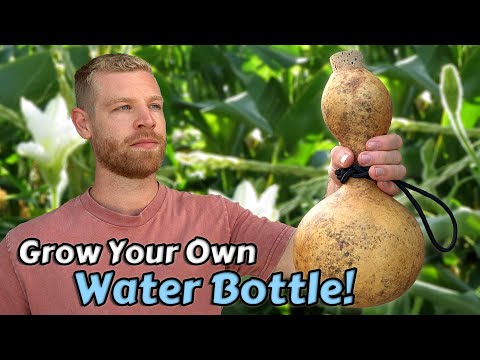 A good example though, is this water bottle made by a New Zealand-based YouTuber known only as TheKiwiGrower. With a handful of bottle gourd seeds (also known as a calabash), he spent about a year growing and cultivating his plants before using them to store water. It isn’t the most time-efficient method of creating a water bottle, mind you, but it is one of the more interesting ones.

You can watch the video to see the entire growing process, but I’ll quickly sum it up. TheKiwiGrower waited for the plants to whittle and die before leaving his gourds to the elements for about six months. All the flesh and pulp inside the gourds dried up during this time, making it easier to hollow out.

Once enough time had passed, he thoroughly removed the mold and dirt on the outside with a stainless steel scrubber and water (he also mentions you can get the same results with diluted bleach). He also sanded down the gourd to smoothen it out and make it more rounded.

He cut out the top of a now-hardened gourd with the outside clean and began removing the insides. TheKiwiGrower also threw in a couple of rocks to help dislodge the strings and membrane inside the gourd. He gave the inside a good spray with a hose to finish cleaning it off.

He poured in some melted beeswax and swirled it around the gourd to ensure the insides were waterproof and that no mold could grow. He also mixed one part beeswax with four parts fractionated coconut oil to create a polish he applied on the outside of the gourd.

TheKiwiGrower also made a sling which he wrapped around the neck to make carrying the gourd easier. He topped off the gourd with water, popped on the cork lid, and voila – his water bottle was complete.

You may have seen anime or video game characters with similar bottles, but those are likely filled with sake or some alcoholic beverage. TheKiwiGrower’s gourd bottle, on the other hand, contains two liters of simple, life-giving H₂O.

TheKiwiGrower’s YouTube channel is dedicated to showing you how he grows, cultivates, and makes use of the different plants in his garden. He hopes that more people will give gardening a shot by doing so!

All You Need to Know About Dedicated IPs vs. Shared IPs