How do you open your first 3D print store? Why you kick off the event by cutting a 3D printed chain with a pair of bolt cutters. That’s exactly what iGo3D did. An established online 3D print source/supplier, they’re bringing on the brick-and-mortor, opening the doors over the weekend to the iGo3D Store, the first 3D print store in Germany. The street level space houses printers, scanners, materials and printed goods within a 1430 sq ft retail space and includes a 400 sq ft workshop. The store will be open to the public starting Tuesday, September 10th (today) from 10 am to 6 pm. Michael Sorkin, founder of CEO iGo3D, fills us in on the event and tells us more about the new shop.

iGo3D is the debut of a specialized local store for 3D printing in the city of Oldenburg, Germany, just Southwest down the E22 from Hamburg. The opening ceremony took place on September, 7th at 2:00 PM in the City Center of Oldenburg. The shop was established as a local source for 3D printers, scanners, filament and accessories with plans to open several stores in Germany’s largest cities of Berlin, Frankfurt and Hannover over the course of 1 to 3 years.

3D Printer brands Ultimaker, Builder, Witbox, 3D Systems, Leapfrog and Felix are available at the store with 3D scanners from David Laserscanner, filaments and printed products by Fresh Fiber, including jewelry, iPad and smartphones cases, 3d printed furniture and lamps. There will also be an opportunity for makers, FabLabs or Hackerspaces to showcase newly developed products in the local store for feedback from potential customers. Each will the have the opportunity to presentdisplay their creation in each store for free.

The store will also house exclusive product. An example of this is the upcoming release of the “Printmate 3D” 3D Printer, specifically developed for schools in collaboration with FabLab Kreativitaet Trifft Technik. The Printmate 3D is a brand new, yet to be unveiled 3d printer with lots of potential, sold exclusively in iGo3D stores and via the website.

From Michael:
“Since April of 2013, the iGo3D website has been the first point of contact for 3D printing in Germany, offering the largest selection of 3D printers and filaments among “Trusted Shops” with an independent sales team and technical support for the machines. The opening of the local store is just the next step in the development of iGo3D and very important to promote 3D printing among the German public.”

The advantage of the shop also includes the convenience of stopping by, view the devices in operation, inform themselves about the possibilities of 3D printing and snag the right equipment for their needs then and there. They are, of course, planning to increase their product offering over the coming months, including a more extensive selection of 3D scanners and an “On Demand” service to scan, send and print your 3D object to pick up at the store. With an onsite workshop, they are also developing concepts for courses, workshops and educational offerings. Here’s a tast of what the store looked like on opening day. 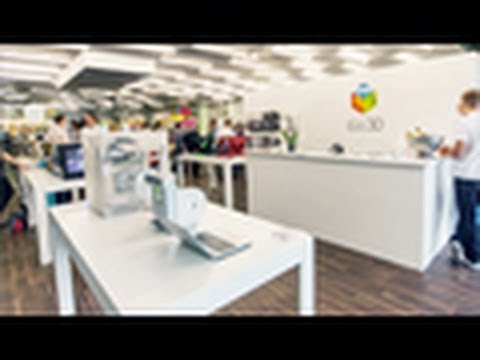