We’ve all seen how prosthetics help folks with missing limbs, but we don’t always get to see them made by the same people who wear them.

This could be because the limbs they are missing involve one or both of their arms, which a lot of people deem essential in making anything of value, much less something they can use as a mechanical appendage. Another issue is having the technical know-how to create such an appendage, as you can’t really make an arm out of sticks and stones. (There’s bound to be someone out there who will prove me wrong, though!)

After suffering an accident that resulted in the loss of four of the five fingers on his left hand, Ian Davis set out to improve the partial prosthetic market by creating cool and functional attachments that can be used by disabled people worldwide. And what better way to start it than making prosthetics for his missing digits? 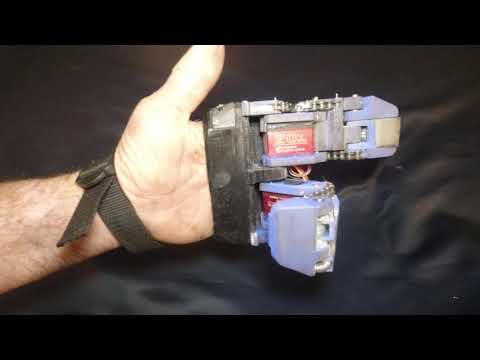 One of his first prosthetic designs is a two-fingered, bio-electric prosthesis. And while Ian thinks of this as his “mitten hand”, others familiar with pop culture will immediately draw parallels to the three-fingered turtles with attitude – the Teenage Mutant Ninja Turtles.

Unlike the mutant turtles who had no say in their anatomy, the design for this prosthesis was intentional. The hand itself is made of printed resin and uses Force Sensitive Resistor (FSR) sensors to detect motion from Ian’s flesh and blood hand. When he tries to move his fingers, the sensors turn this request into motion and activate the servos on the fingers. To limit the servo motion, he also installed an FSR sensor onto each of the two fingertips.

What’s more awesome is that Ian actually created them with three different speed settings – slow, medium, and fast. The prosthetics can be adjusted when the user needs the hand to be faster or more delicate. He also made what is essentially three different grip patterns –one which curls both fingers, another which makes only the index curl, and the final one which activates only the second finger.

Despite the work he put into it, Ian eventually decided to move on and work on other prosthetic ideas. Two, giant-sized fingers just don’t deliver the same precision and versatility four smaller fingers do, and after living most of his life with that exact number, Ian might have wanted something a little closer to a real human hand.

Ian Davis’ YouTube channel and Instagram accounts are chock-full of documentations of his different prosthesis projects, some of which are straight out of fiction (like an Ash vs Evil Dead chainsaw attachment). So, if you want to help him make more, consider checking his Patreon page, as well.