We always asked ourselves which would win in a fight: hot or cold. Well, the answer is never as simple as we would like it to be.

A lot of factors determine which element would be the victor. The overall temperature, the volume of the substance, and the surrounding environment where the experiment takes place are just three of several variables you have to take into account in such a situation.

While we’ll never get a definitive answer, it’s always fun to see other people conduct experiments which involve heating or cooling objects at dangerous temperatures.

Ben from PressTube is one of those curious folks brave enough to conduct an experiment By pouring heated lava onto a bowl of dry ice, he tries to determine which substance is more dangerous to come into contact with: 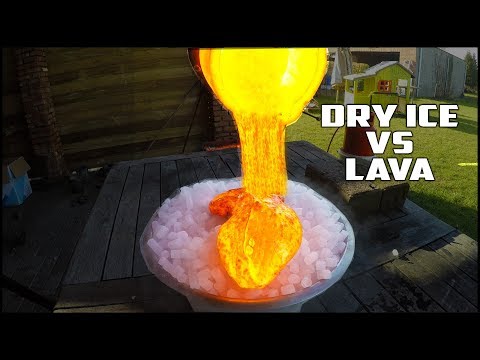 Now you may be wondering where Ben can get actual lava for his experiment. I mean, he can’t just take a trip to a nearby volcano, plop some lava into a Coleman container, and drive back home, right?

Well, thankfully he doesn’t have to. Seeing as lava is the source material of most rocks, Ben takes some volcanic rock and superheats them in his crucible. After leaving it to heat for some time, he is able to get his sweet and spicy homemade lava.

Dry ice, on the other hand, is much easier to get. Restaurants use the stuff all the time for keeping food extra cold. And as you can see, his dry ice comes in standard Styrofoam packaging.

Touching the dry ice can absolutely risk you to frostbite, so Ben makes sure to wear protective gloves before scooping some dry ice into a bowl.

Once the molten rock has reached its melting state, it’s time to get it out of the crucible and to put it onto the dry ice. Using a pair of holding tongs, Ben carefully lifts the container holding the 1400°C molten lava and pours it on top of the -78°C dry ice. Thanks to the inherent properties of the dry ice, there is little to no vapor emanating from the contact that happens. This makes it easier for us to witness the reaction.

Now you would think that with such a long prep time and extremely high temperature, the lava would create a melted hole in the bowl in no time. But after a few minutes on the dry ice, the lava turns into solid and begins to blacken. Nonetheless, this doesn’t mean the lava has lost its heat.

With utter caution of avoiding any possible direct contact to the recently molten lava, Ben takes his tongs and flips the solidified lava over. You can see see the indents where the lava made contact with the dry ice pellets, as well as the lava inside smoldering with the last embers of its remaining heat.

Pretty soon, the lava sits all snuffed out on top of a full bowl of dry ice. So the point of the story is: keep your cool under pressure. Oh, and don’t touch dry ice or molten lava!

Joking aside, this was a very interesting experiment to watch. So, if you want to see Ben melt and create more stuff with his crucible, check out his YouTube channel, PressTube.

5 Best Desk Organizers for Your Office