Safes are some of the most secure places in the world to store your belongings. I mean, it’s why they’re called “safes” in the first place. A lot of them are meant to withstand the harshest of situations, so you won’t be surprised to find fireproof, bulletproof, and even idiotproof variants that keep you from locking yourself out of your precious safe.

But what if you pit not one, not two, but ten safes against a tank? 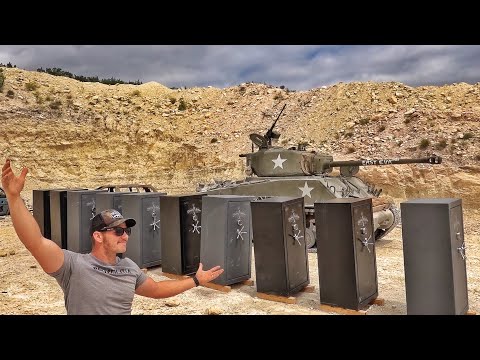 This is what explosives and gun enthusiast channel DemolitionRanch aims to find out. They have propped 10 Liberty gun safes in a row on an isolated plot of land and aim to shoot at them with a 1944 World War 2 M4 Sherman Tank. Will a 17-pound shell make it through all the safes? Let’s find out.

The hardest part about this experiment is making sure the tank round actually hits all of the safes dead-center. It’s really easy for any projectile (bullets and tank rounds included) to veer off-course due to gravity, air pressure, or any other incalculable and unforeseen elements. The shell could just ricochet off of the first safe and land somewhere nearby, so it’s a good thing they’re doing this as far away as possible in an unpopulated area.

With a couple of GoPros in place and a ripcord to fire the loaded Sherman tank, the first 76 mm solid steel shell is launched towards the safes!

The tank shell has actually hit the safes quite high for the initial shot, hitting the top of the first safe and smashing the second into bits. The third safe was damaged a bit but this is where the shell starts to deviate from its intended trajectory and veers off course. While destroying two gun safes is cool, it isn’t quite the amount of destruction you would expect from a tank.

The team remove the first two destroyed safes and get ready to shoot a second round into the remaining eight safes.

This time, the round hits pretty close to the center of the safes. After busting through the first safe, the round actually turns sideways and continues through. You can see the indent of the tank round as it rotates through each safe, making its way through a total of five safes before denting the sixth safe’s door and landing on the ground nearby.

Upon closer inspection, they discover the round broke the bars which allow you to open the safes. This means that if you were ever to rob one of these babies with a tank (though I’m can’t imagine where you’ll manage to get yourself a tank), the contents and the safe would be beyond recovery. This is good publicity for Liberty safes, however. If you really, REALLY want to keep your stuff safe, just place it behind a wall of their safes and not even a tank can get to it.

The DemolitionRanch YouTube channel is full of videos with things that go boom, all for the sake of experimentation, evaluation, and the sheer sight of seeing things explode.