Mark Rober, a former NASA and Apple engineer, always has something up his sleeve. This time, his newest project is a domino-stacking robot he nicknamed “Dom” (short for “Dominator”). 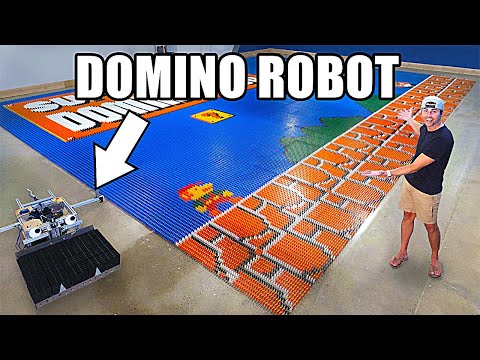 As said, Dom has one specific function: to stack as many dominoes as fast and as accurately as possible without a single misplaced piece. Why, you ask? Because stacking millions of dominoes in lines would probably cost any person’s sanity. Plus, who doesn’t love toppling them over without the fear of doing it again because you have a reliable domino-stacking robot?

This makes the robot extra special compared to Mark’s previous projects. And though it took him and three undergraduate engineers five years to complete Dom, Mark feels satisfied with his creation.

But before we get to Dom, we have to first look at the impressive loading station made primarily out of Hot Wheels tracks and various custom 3D printed parts.

Using conveyor belts, dominoes are loaded by color onto the station where a Kuka robot arm at the top awaits them. The arm picks up the dominoes one by one and places them into 1 of the 300 chutes, which are all made of plastic Hot Wheels tracks measuring 2.7 miles or 4.3 km in length.

Once the dominoes are loaded, Dom swoops in under the loading station and waits for them. The lower layer of dominoes is dropped and off he goes to place them!

Dom himself is just as impressive as the loading station. Thanks to a pre-programmed route and GPS sensors, the robot knows exactly where to go to place the dominoes. As Dom comes closer to his destination, its positioning gets fine-tuned with the aid of infrared cameras and trackers on the ground.

To get around, Dom is fitted with omnidirectional wheels. While your normal wheel can only go forwards or backward, omni-wheels have small discs on them which allow for fine movements in any direction. With these wheels combined with a few brushless servo motors, Dom can make accurate and minimal adjustments to his position very easily.

Dom also has some 3D printed parts on his front end which funnel dominoes into the slots. Once the dominoes are loaded, a servo slides out a tray underneath the dominoes; effectively placing them in the desired location. Of course, that’s only scratching the surface of the Dominator. If you want to find out more about Dom’s design, you can check it out here.

After easily besting mere human domino artist Lily Hevesh in a stacking competition, Dom set his sights on filling an entire warehouse with over 100,000 stacked dominoes.

As you would expect from a machine built specifically for this purpose, the Dominator stacked all the dominoes in order without a single accidental topple. The end result was a beautiful 100,000-domino mural of Super Domino Bros.

The build took a little more than 24 hours. Nonetheless, considering it took a group of domino artists a hellish week to do the same thing only to experience sorts of error, Dom’s performance can be considered truly impressive.

With the dominoes in place, the only thing left to do for the team was to knock them down! Mark Rober made a special mechanism which pushed a series of pipes down onto the domino art. After 5 years of hard and grueling work, hearing those dominoes fall in sync must be 10 times more satisfying for them than for any of us who can just witness the marvel on YouTube.

How Much G-force Can an Average Human Withstand?