Back before having a car, having a bike meant you were the coolest kid on the block; it said you could go anywhere, do anything, and cause untold bodily harm to yourself when you fell flat on your face.

As you get older though, having a car becomes way more chill than owning a bike. It’s air-conditioned, comes with cup holders, and most importantly, it has airbags which protect your oh-so-delicate face.

The guys at Make It Extreme want to bring back the days when bikes were cooler than cars. How? By taking two used car tires and making a heavy duty bike of their own: 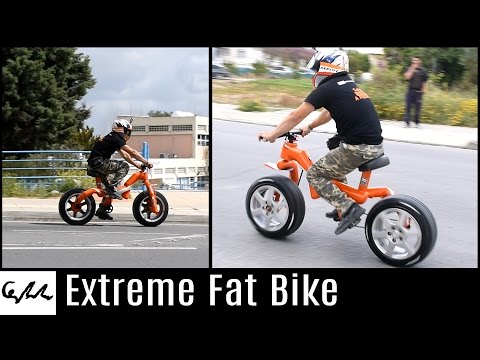 Taking inspiration from existing “fat bikes” – bikes with wider wheels than normal bicycles – the team set out to make a bike whose parts are all “fatter” than their normal-sized versions.

They begin by removing the tires from an old car and use a bearing and single prong to attach the wheel to the bike frame. The body itself is made from a four-inch thick tube while the front prong and back scissors (which connect to the rear wheel) are made from a three-inch thick tube.

While the front wheel is connected to the frame by a single metal tube, the rear tire requires a connection to the pedal and chain. Construction of the bike is made on a straight line to make sure the bike’s framework is stable and doesn’t lean over too much on one side. It sounds easy, but making a heavy-duty bike such as this one requires a lot of fitting, cutting, and welding of various metal parts.

You’d think a bike with this much metal would be impossible to operate with just your legs, but it works just as well as a standard bike. To finish things off, Make It Extreme paints the bike in the racing colors of Repsol Honda.

You can find the entire build process on instructibles.com, just in case you want to make one yourself and rule the streets. For their other gigantic builds, head on over to Make It Extreme’s webpage or their YouTube channel.