Created in 1998 by the now-defunct Tiger Electronics to be a demon furball companion to children, the infamous Furby saw widespread success before being repurposed by countless modders. 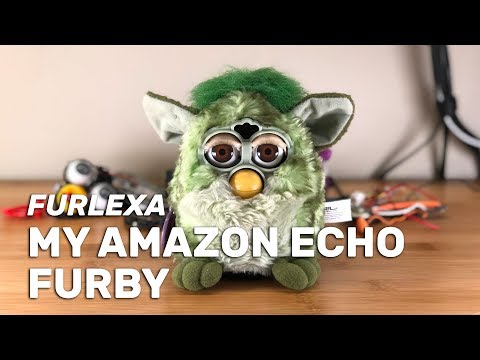 Among others, Zach Levine, an electronics enthusiast at howchoo.com, has taken a 1998 Furby and outfitted it with some modern upgrades. He replaced the original Furby’s processor with a Raspberry Pi to run Amazon’s Alexa, all while using the robot’s motor to track Alexa’s spoken words to make the new, and improved “Furlexa”.

Dialing things back a bit, an unmodified Furby is made up of a resin-covered microprocessor, a pretty horrible camera and speaker combo, infrared and light sensors, and a single motor which controls all the fuzzball’s motor functions. These few, easily replaceable components are what make Furbies so easy to hack.

Apart from stuffing a wireless Raspberry Pi Zero W into the robot’s insides, Zach upgraded Furby’s microphone and added a small motor control driver/board to the the computer’s GPIO to control Furby’s original DC motor and gearbox functions. Now, whenever Alexa speaks in her sultry voice, Furby’s mouth, ears, and eyes respond in a similar motion.

The resulting creepy monstrosity is a toy that now has, even more control over a users’ life than it initially did. The entire thing runs on Furby’s original battery pack, which is pretty impressive since the new Furlexa can do everything Amazon’s Alexa can do. Using the open-sourced Alexa voice service, Furlexa can turn on lights, look up stuff on the internet, and play your favorite tunes.

Zach details the entire build process here, and it’s definitely worth checking out if you still have a Furby or two lying around the house!