The Hangprinter: A Frameless 3D Printer

The Hangprinter is one of the most unusual 3D printer concepts yet seen, and it actually works.

The Hangprinter is a project by Torbjørn Ludvigsen, based in the city of Umeå in the northern end of Sweden. Ludvigsen, who goes by the handle “Tobben”. It’s a RepRap variant designed by Ludvigsen apparently in 2014, but is now something a lot more than just an idea.

The Hangprinter’s name isn’t just for fun: this machine indeed has no frame at all, unless you count floors, walls and ceilings as such. It operates by simply hanging by cables from the ceiling and three anchor points on the floor.

The central extrusion device is stabilizing in space by tight, controllable cable lengths on the three floor attachment points, as well as gravity pulling down along the z-axis hanger strings.

The extrusion unit can raise itself by pulling on the z-axis cable, and move laterally by appropriate manipulations of the three floor anchor cables. The installation of the anchor points is more or less arbitrary, and apparently you simply set their locations in firmware so that the system can compute the movements accurately.

In the video you can see how this interesting machine works. 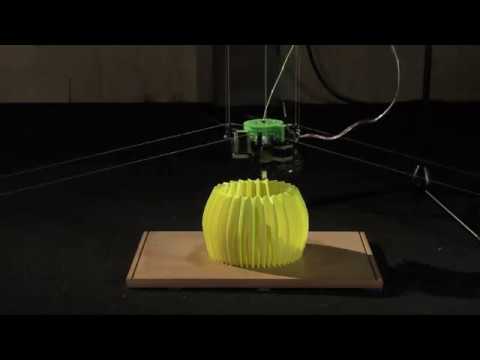 Needless to say, the accuracy of this setup is not nearly as precise as you’d find with a desktop 3D printer made from precision metal components and rigid frame, and Ludvigsen explains that the layer resolution is “less than a millimeter”. But remember that the Hangprinter, having no frame, means you can print very large objects that don’t require high resolution. In fact, high resolution would mean the larger prints take longer to complete.

The specifications for this printer are obviously variable; the build volume is as large as you can string the setup. However, there will certainly be practical constraints. One major constraint, for example, is that extruded plastic, PLA in this case, would warp at large scale. In the video the print surface appears to be unheated. But if it were, the prints could be somewhat larger.

The entire project is released as open source, and Ludvigsen hopes to deliver more function in the future as you’ll see below. However, you can attempt to build one yourself and it won’t cost very much, as the price estimate for the parts and supplies runs only about USD$250.

While this is clearly a developmental experiment, the concept is quite promising. I suspect this approach could be scaled up to enable printing of very large objects, and easily done on building sites where you need only find some anchor points.

I believe this to be a very promising concept that should be explored further. However, it seems that Ludvigsen is the only person on the case at the moment. He’s seeking assistance from the 3D printing community to permit him to continue development of the Hangprinter so that everyone can take advantage of it.

He’s currently accepting donations at his BountySource page, where you can help out with a number of options.

Behind the Design: Weta Workshop’s Ghost in the Shell Geisha Mask