Germany Is Starting To Incorporate Electric Line System Into Its Highways

After years of parading the existence of electric and hybrid motors, we’re finally getting some progress in the field. Schleswig-Holstein, the northernmost state of Germany, has begun implementing eHighway test projects to make electric and hybrid heavy-transport vehicles more viable.

You would think that the government is putting up dozens of charging stations for drivers of these vehicles to use, but no; the answer is much more… suspended. Tom Scott recently took a trip to the northern city of Lübeck and saw just how their highways have changed. 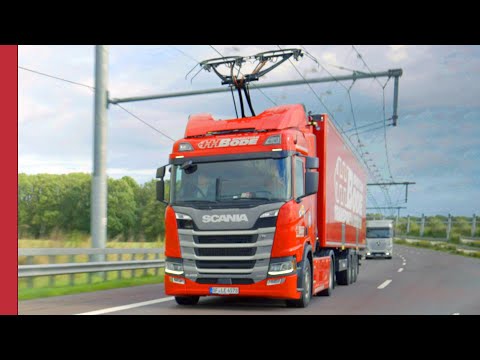 Along either side of a 5-kilometer section of the A1 motorway stands a lane of overhead lines held up by masts. Through the use of substations, these lines supply electricity to special hybrid trucks: vehicles equipped with pantographs (those things you see on the top of trams and trains).

When under the overhead lines, these hybrid trucks can prop up their pantographs. This not only allows them to use the electricity powered by the city to propel them forward, but it also charges their batteries. Once they get off the system, hybrid trucks use their standard hybrid drive to continue on their merry way.

Considering a lot of heavy-duty trucks are used for transport and delivery between cities, putting the lines on a busy highway makes perfect sense. Truck drivers can use their hybrid drives on less-trafficked smaller roads to get to their initial destination, then prop up their pantographs on the highway for the bulk of the journey. When they need to get off the highway, the pantographs automatically retract. This allows the truck more clearance to get under bridges and through tunnels.

The reason for this is because putting overhead lines over long distances isn’t cheap. According to David Cebon, a professor of mechanical engineering at the University of Cambridge, he thinks that the system will be able to pay for itself in the long run. The money that will be saved from gas prices by truck drivers can be used to pay a small electricity tax imposed by the government for using the overhead lines. This won’t only pay for the electricity, but the money that will be earned can be used to further develop the technology and increase its coverage to other less populated parts of Germany.

The project is still in effect, so we won’t know the results until the end of 2022. Still, the results can’t be ignored. The technology definitely works, and truck drivers don’t seem to have any qualms about running their trucks on electricity, provided they get to their destinations on time. Only time will tell, but this is already looking to be one big step towards an electric vehicle lifestyle.

Spimbey Is a Modular Playground That Can Fit Anywhere