We all know just how versatile a heat gun is and how useful it can be in everyday handiwork. But when you’re armed with a device that can spew hot air up to 700°C, you’re bound to explore that power for some mindless fun. 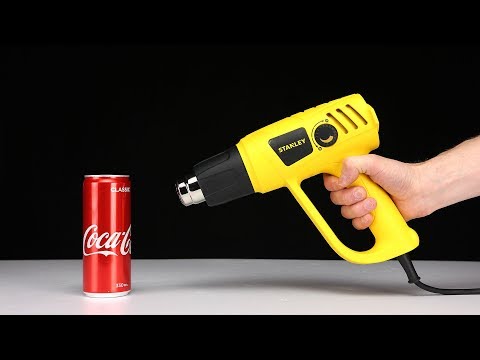 A man going by the name of Mr. Hacker is just one of many who have enjoyed the heating capabilities of a heat gun for their own nefarious (and very entertaining) purposes. The heat gun used in the video above isn’t the hottest version out on the market (it only reaches up to 600°C), but it still melts, burns, and explodes normal everyday objects pretty easily.

Ping-pong balls, for instance, can be levitated above a heat gun pointing upwards. This works with all types of devices that emit air, but due to the high temperatures coming out of the heat gun, the air inside the balls expands and causes the balls to swell. When the balls can take no more, they pop and (in some instances) catch fire.

To prove the air inside the balls is the cause of the swelling, Mr. Hacker stabs a hole through one ping-pong ball and holds it in place with a screwdriver. Instead of swelling, the ball actually starts to shrivel up. With enough time, the heat gun melts the plastic ball down to almost nothing.

Matches are a no-brainer experiment for the heat gun, but did you know you could ignite them without taking them out of the box. It seems so obvious when you think about it because the heat gun actually increases the temperature around the box of matches, thereby removing any need to strike the match heads.

You would think heating cheap plastic lighters would cause them to catch fire but instead, they forcefully jettison the fuel from the container. This is due to two factors: the plastic area nearest the heat gun melting away and the lighter fluid evaporating before it has a chance to ignite. Once the fluid has evaporated, the lighter can’t contain the amount of gas inside it. So it forcefully expunges the excess gas through the most accessible exit: the melted plastic.

What you see emanating from the melted hole is the lighter fluid that didn’t evaporate.

Similar to the lighters, heating up an aluminum Coke can cause the soda inside to bubble, evaporate, and eventually explode the top off. Since the melting point of aluminum is way higher than plastic (660.3°C, just 60.3°C above the heat gun’s heating capabilities), the can doesn’t melt down.

Likewise, taking a heat gun to a glass bottle of Coke doesn’t break down the container. Glass has an even higher melting point, breaking down at around 1400 °C to 1600 °C, so all the heat gun does is evaporate the soda inside. It does cause a very high stream of cola to pop out of the cap and spray all over the studio, however, which is nice. I definitely wouldn’t want to be on clean-up duty after this video.

These are just a few of many, many shenanigans you can get yourself into with a super-powered heat gun. If you have some excess junk to get rid of, you could definitely add more to Mr. Hacker’s list. Just be sure to follow proper safety procedures!