Remember when you were younger and you would spend sunny afternoons burning ants (or in my case, leaves) with a magnifying glass? Even though it may have caused colored streaks to your vision momentarily, I’m sure you still felt powerful being able to harness the power of the sun to melt objects.

The folks at YouTube channel Superkot recently revisited this childhood pastime, only instead of using a regular-sized magnifying glass, they employed a giant solar lens to do the burning for them. 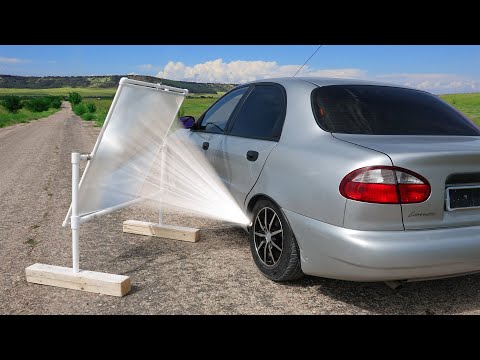 A Fresnel lens – the name of the solar lens they used – is a compact lens developed by French physicist Augustin-Jean Fresnel. It’s made up of a number of a succession of concentric rings – each containing a portion of a simple lens. When assembled, the Fresnel lens intensely magnifies light at a single point.

Fresnel lenses were used to magnify the light emitting from searchlights and lighthouses, but have since been replaced by more cost-efficient electric beacons. Though the latter is getting more and more popular, there is a special novelty in Fresnel lenses that can’t be replaced.

The experiments done by Superknot show just why they went out of style. These things are dangerous! One Fresnel lens incorrectly pointed towards the sun can create a 3632°F-burning hole in almost any material. Wood, coins, and even the iPhone used in the experiment were no match for the power of the said lens! If a Fresnel lens could explode one of Apple’s electronics, imagine what it could do to your skin on a sunny day.

By far, the coolest and most informative test the team conducted with the Fresnel lens has to be the one with a car tire. After placing a GoPro inside the inflated tire, they popped the tire onto a car and pointed the Fresnel lens within the camera’s vision.

You can start to see the rubber melting and flaking on the outside while on the inside, you see the emergence of a hole starting to form (as though something is lightly puncturing it). After a while, the rubber eventually melted away – letting the air inside the tire escape through the opening.

So the moral of the story is: don’t play with Fresnel lenses! Apart from the intense heat produced by the magnified light, looking at your handiwork could permanently damage your eyes without proper protection. Stick to magnifying lenses and wear sunglasses instead!

So Pro Is a Remote Control Ring for Your Bluetooth Devices