Although product designers have been using various additive manufacturing technologies to create rapid prototypes for decades now, few objects have ever been bigger than a traditional consumer electronic product. Thanks to recent developments in the past few years though, the scale of 3D printing – through FDM 3D printing methods, to be exact – has grown exponentially to include everything from furniture and automobiles to even urban development projects and housing.

Now, a new French startup wants to bring large-scale 3d printing into a consumer-friendly experience that allows users to watch as their furniture purchases are manufactured right before their eyes – and in some cases, even design the furniture themselves before pressing “print”.

The company, Drawn, was created by French design engineer Sylvain Charpiot and utilizes a large scale 3D printer – an industrial automobile factory robot – as its backbone. While he initially unveiled the unique 3D printer back in 2014, Charpiot has only just now publicly presented the technology as its own brand – which aims to manufacture affordable plastic furniture and decor on-demand.

While it might be hard to believe that a piece of furniture can be literally ‘printed’ right before your eyes, the company claims that one of their flagship full-size chair designs can be printed in less than two hours – which is considerably less time than it can take to print a scale prototype of the same design on some desktop 3d printers.

Without a doubt, the capability of Charpiot’s printer is surely impressive. However, one can only wonder if he has explored using the large-scale 3D printer to create similar designs out of discarded plastic or even natural materials … something that would certainly give the products some added interest. 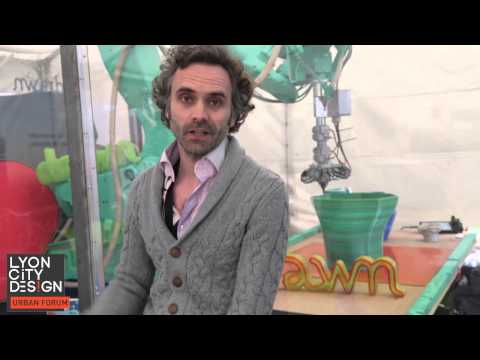 Although the 3D printer is fully-operational, Charpiot is currently seeking funding on Kickstarter to raise awareness of the Drawn brand and is selling off a variety of objects that were produced with the machine including shelving, lamps and furniture, among other objects.

Find out more by heading over to Drawn.

IFTTT Introduces 'The Maker Channel' for Makers and Hardware Developers