You’ve probably seen a Japanese kunai in a movie or anime before. Initially built as a gardening tool, these forged metal pieces can become deadly in the right hands.

Due to their multi-purpose nature, kunai were made from sturdy yet simple metals. But I’m pretty sure no one in Japan traditionally made kunai from rusty coil springs; probably because there were no cars back in the day. 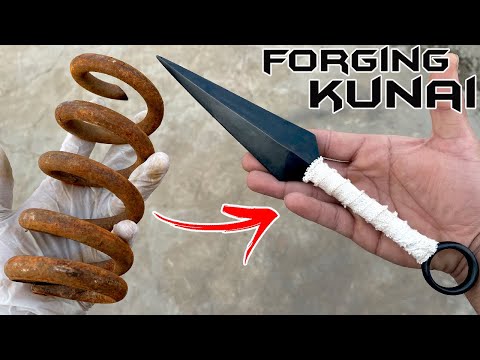 The first order of business is to fold the coil piece into a flat metal strip. Seeing as he doesn’t have a power hammer, it took Random Hands hours of work to forge this old car part into a workable material with a hand hammer.

Once the piece is flat, he spray paints a stencil of a kunai onto the surface and cuts it into shape.

Cutting the metal is easier said than done, since it is extremely thick. To do this, he uses an angle grinder with a metal cutting disk. Creating the straight lines of the tip is easy enough but to make the slim handle, Random Hands has to make various cuts. This allows him to create chunks of excess metal which he can hammer out later to shape the rest of the kunai.

Sanding and Filing the Edges

The metal could use a bit more work to look like a kunai, so he takes it to a belt sander to smoothen it out. Random Hands flattens the tip of the kunai while filing down those unsightly grooves at the handle. This is also a perfect time to drill the ring at the kunai’s pommel. With the general shape of the kunai finished, he sands down the sides of the metal to reveal the shine within.

Though the metal now has a distinct kunai aesthetic, it’s still very thick and flat. He takes it to a lathe to make the round handle, which isn’t easy considering the metal around the middle is very flat. With enough time and some sanding afterwards, Random Hands turns what was once a grove-filled metal piece into a smooth handle.

The only parts left to complete now are the pommel and the blade.

Shaping the Edges of the Blade

Making the business end of the kunai looks a lot easier than making the round handle. By marking the edges of the blade and using an angle grinder, Random Hands can easily flatten the blade into the shape that he wants. To make the blade look cleaner, he files it down after grinding.

The final part left to shape is the pommel, which is done by using a drill bit to create a curved ring for ropes and fingers to slip into.

Now that the kunai is shaped, it’s time to temper the piece to make it hard and sturdy. Random Hands first places the kunai in a furnace. Once ready, he removes it from the heat and immediately cools it down.

With the hardened metal now tempered, he can use a grindstone to sharpen the blade into a working (and very deadly) tool. After some hand sanding, he sandblasts the kunai to give it a matte finish before painting it with super blue to give it a darker look and prevent the metal from rusting again.

Finally, he wraps the handle in white cloth to create a nice grip before promptly throwing the kunai into a piece of wood. It sticks to the surface like a good kunai should, and Random Hands proceeds to throw his new toy at other innocent inanimate objects.

Random Hands makes more than just weapons. His YouTube channel also has a lot of content where he restores rusty and neglected items back to their former glory. Be sure to check them out if you ever want to see nostalgic items brought back to life.