While a broken shovel and a broken piece of concrete aren’t likely to generate a lot of of inspiration for most people, trained carpenter-turned paleolithic weapon craftsman John Heisz isn’t your average Joe.

The Ontario, Canada-based Heisz operates a website and a YouTube channel that feature hundreds of made-from-scratch projects ranging from push brooms to various woodworking jigs and wood computer housings to guitar pre-amps. Needless to say, Heisz covers a lot of ground and some have even declared him as capable of “building anything with his hands”.

For his latest project, Heisz took the “building anything” title to new heights by fabricating a knife out of a broken shovel and a broken slab of concrete.

“This project, like so many others, came to me while I was working on something else and uses an idea that I’d wanted to try for some time,” said Heisz on his blog. “The job I was doing was breaking out the concrete walkway in front of my house and using my shovel to pry the pieces up and apart, when the tip of the shovel cracked.” 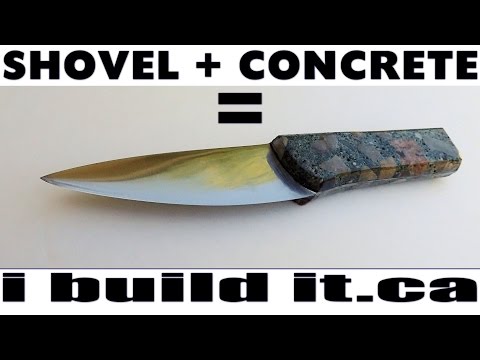 For a more detailed explanation of his build, be sure to head over to Hesiz’s blog.

Students! Spruce up Your Portfolio This Summer with These Two Free Portfolio Handbooks