You can deny it all you want but at some point in your life, you probably thought of digging a hole to (or through) the center of the Earth. There are those western folks who even believe that with enough hard work and dedication at digging a hole, they could pave the way for the first direct tunnel down to China.

While not as elaborate as a tunnel to another country (That’s in another video!), YouTuber Tyler Oliveira’s hole digging plan prompted him to get some friends to join him in digging a secret underground bunker. The most interesting part? They used nothing but S-P-O-O-N-S! 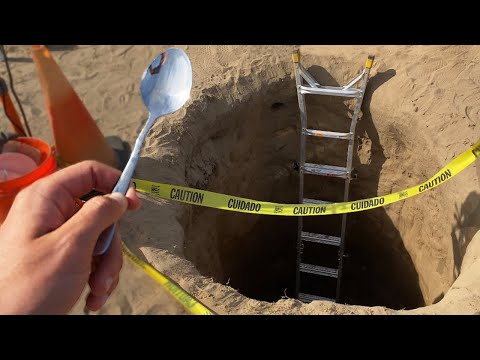 Another crazy thing about the project (apart from the spoon thing) might be the fact that Tyler and his buddies used nothing to soften the ground they dug up. They instead poured old-fashioned determination and hard-head attitude to the solid, untampered soil.

Tyler spent the first day digging his underground bunker solo. After 5 hours of digging with a normal-sized spoon, he eventually upped his arsenal with a spoon five times bigger than the previous one. Unfortunately, this bigger spoon broke rather quickly, and Tyler had to find another way to make his underground dream come true.

It is as they say: “if you can’t beat ‘em, get a bunch of friends to help you out.” With that, the Day 2 of the underground bunker started with the cavalry arriving. With six guys each armed with different spoons, they divided the work amongst themselves.

“Scrapers” were pioneers who broke down the solid ground both below and around the hole. “Scoopers” shoveled the soil the Scrapers broke down into buckets. Finally, “Bucket Emptiers” took the displaced soil and dumped it elsewhere.

After digging almost 4 feet, Day 3 saw the introduction of an even larger set of spoons to their arsenal. Now armed with spoons the size of shovels, the team managed to turn the hole 6.5 feet deep in no time.

After days of digging, Tyler and his friends proved that spoons aren’t meant to be used as digging tools. Even their giant spoons were even bent by Mother Nature.

Now forced to use the smaller spoons, the team’s momentum started to slow down. However, eager to get this bunker done ASAP, Tyler brought on three more of his friends to help out. These fellows, unhampered by days of spoon work, immediately went to help dig it 8 feet deep. Digging into the night, the team finally dug the hole 12 feet deep.

Satisfied that the hole would suffice as a bunker, the boys covered the hole with a metal trapdoor. To make it even more inconspicuous, they placed a bit of lawn topped with a mailbox. Now whenever someone goes into that desolate wasteland, all they will see is a bright red mailbox on top of some green, green grass.

Of course, it wouldn’t be a bunker without amenities. That said, Tyler left some items in it. Now, this baby has every appliance known to man. You have a rice cooker, a mini-fridge, a toaster, and air conditioning! Tyler can even dig out more mini-holes to fit whatever he needs to survive an apocalypse, as long as there’s still space available on the walls of his bunker!

Tyler’s project isn’t a hole leading to China, but such beauty is a special joy in and of itself. So, if you find yourself with kids asking you to make them a treehouse, you might want to consider this cool underground bunker instead.