If the past couple of years have taught us anything, it’s that isolation can bring out the crazy, creative juices inside all of us. And that’s not a bad thing by any stretch of the imagination.

Trapped within the confines of his home, Half-Asleep Chris took to making LEGO sets naturally. But upon making his first LEGO train set, his disappointment in the simplicity of the tracks pushed him to make his own. With 52 boxes of additional LEGO track, he created a line going around the inside and outside of his house.

But what’s a train ride without some sights to see? In addition to the ridiculously long 100-meter track, Chris added a few points of interest to keep his LEGO self on the train preoccupied. The end result is a trip unlike any other: 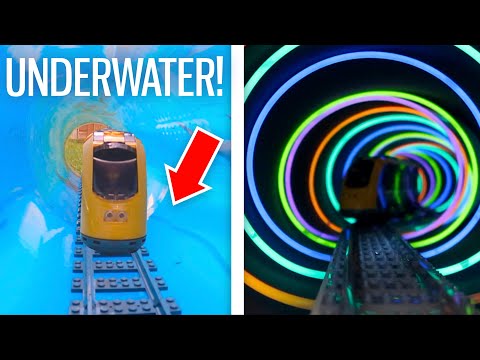 Most of the tracks are drilled onto flat wood planks. These planks run throughout the house, impeding the daily routines of its normal-sized inhabitants. The train begins its journey near the living room, where it moves into the living room proper and passes through its first stop…

Much like Singapore’s Gardens By The Bay, Chris’s geodesic dome is home to plants, logs, and all kinds of vegetation. The dome itself is made from connected tubes of A3 paper wrapped in bubble wrap.

To keep with the natural feel of the dome, the planks which run the track inside the dome are wrapped in camouflaged paper to hide their presence. Likewise, Chris added bits of moss around the areas of the dome the train will travel through. He even put a tiny mist machine to give the place some ambiance!

Since the angle of the stairs is quite steep, Chris designed the track to ascend as early as possible. After going through the geodesic dome, the train starts to gain elevation. It passes by the couch, behind a perfectly timed television, through some shelves, and up the stairs.

To compensate for the sudden turn at the top, Chris simply curved the tracks into a spiral. This allows the train to get that extra elevation without too much of an incline.

It is on the second floor where we encounter the most densely populated area on the train’s journey: Chris’s office. It is here where he placed all the LEGO sets he made up to this point so they form a small town for the train to pass through.

Having the Disney castle right beside a haunted house and treehouse might not make sense in the real world, but this is Chris’s office. He can do whatever he wants! To give the area more life, Chris placed a couple of LEGO minifigures to greet the train as it passed by.

The Tunnel of Light

Before going back down the stairs, there is one more stop on the second floor: the bedroom.

Instead of boring you with vistas of discarded clothes, Chris created a light tunnel for the train to pass through. Made from dark cardboard and 87 glow sticks drilled into the tracks, the tunnel travels about 7-8 meters under and around the bed before ending. Once the train exited the tunnel, it would have the final destination downstairs.

Back down the stairs, behind the television, and by the couch, the train ran to reach the final point of interest: the kiddie pool.

Eager to get some good underwater shots, Chris punctured holes inside the pool so he can run some clear, 1 meter Perspex tubes through it. He used flex tape to seal the holes from the outside and sealant on the inside.

Finally, as if to get a good view of the previous spots, the train went over one large stretch of track on a bridge that hangs over the entire pool.

The finished track is definitely worth watching in the end, as Chris mounted a GoPro on top of his single-car train. You can find more of Chris’s creations over on his YouTube channel, Half-Asleep Chris.