When I was four, I had that stupid idea of stopping the blades of an electric fan… using my tiny fingers. Really just a child curious about things. Long story short, I wasn’t able to point at things for a while. But, the good news is I still have that finger (in case you were wondering), satisfied my curiosity, and learned a very important lesson.

That was with a fast-spinning fan. But what would happen if you stuck your finger in something slower? Like say, a car window? 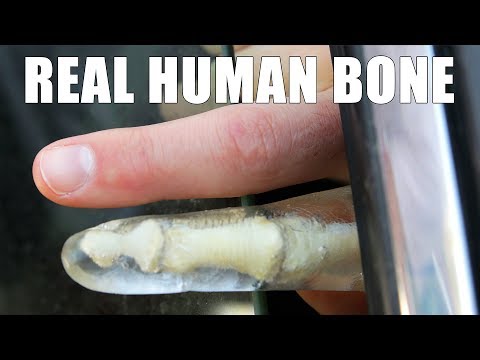 After finding out a German-made Volkswagen’s windows would automatically pull back once it has detected an obstruction, YouTuber William Osman turned into a curious little child. With the bizarre idea somewhat similar to the one I had as a kid, he wanted to test how far could fingers go in terms of car windows.

Osman would use a Ford Taurus’s more dangerous, non-automated windows for the said experiment. Exciting. However, being an intelligent adult, he had the foresight to not put his own fingers in harm’s way.

The American car easily broke through a couple of food items found in William’s fridge, but those didn’t have bones, ligaments, or skin. So, to test if the car window could actually break a human finger, William’s team had to make something with similar components as a human finger.

Four “fingers” were created for the experiments, each with different makeup.

The first finger was made from simple ballistic gelatin – which was basically Jell-O with no “bone” inside whatsoever. The Ford Taurus made short work of this finger; as it had almost no resistance when crushed by the car window.

The second finger also had no bones inside of it but was made from a more expensive synthetic ballistic gelatin. Unlike the first finger, the synthetic gel was supposed to be reusable and better simulate the ballistic properties of gelatin.

When pitted against the Ford Taurus’s windows, the synthetic gel bent just as easily as the first finger, only it didn’t break. So if you happen to have no bones in your fingers, I guess you wouldn’t have to worry about getting them stuck on a car window!

Eager to see some bones snap, Osman tried a much newer American car.

For the finger though, he used a mix of synthetic ballistic gel with a piece of oak dowel inside to simulate a human bone. He put the finger in place, raised the window, and it just snapped the oak in two!

Since human fingers have thick ligaments and bones inside them, I don’t think this would prove that a car window could actually break a finger. The oak dowel used was actually quite thin, and it isn’t really the best representation of what would happen if you stuck your finger in a car window.

But you know what is a good representation of human bones for the experiment? Actual human bones!

Osman never really checked if the finger bones he bought online were actual human bones, but I would rather give him the benefit of the doubt than find out the truth. Just like with the oak dowel finger, he coated the bones in synthetic ballistic gelatin and left it to solidify before beginning the experiment.

Crushing this finger in the car window destroyed the gel, but the bone itself was left untouched. They even tried positioning the finger at a specific angle so that the biggest bone would get pinched by the window. Unfortunately (or fortunately), the dried-up human bone didn’t break.

So there you have it. While you might end up with a couple of bruises and even a broken fingernail or skin (should you be unlucky), there just isn’t enough crushing force in a normal car window for it to completely break your finger. Thank goodness for that!

Make a Simple Heron’s Fountain Out of Bottles and Straws