Mention woodworking to Alex Apollonov and you’ll visibly see his toes curl. The YouTuber and craftsman, known for his channel I Did A Thing, is famous for going barefoot in his videos while making humorous creative content for us to watch.

Apollonov mentions himself that he isn’t a very good woodworker, so when it comes to making stuff out of wood, he finds it’s best to inject his unique brand of humor to make things more interesting.

For example, can he actually make a wooden spoon using nothing but a metal spoon? 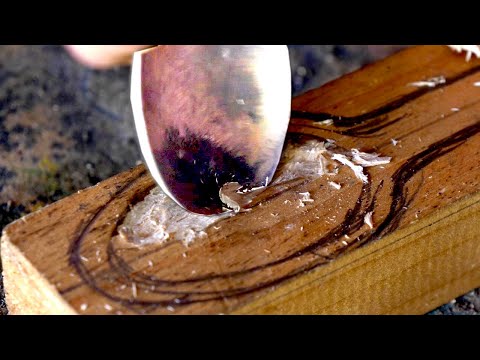 With such a simple yet complicated restriction in place, Apollonov has to find ways to sharpen the dullest utensil known to man so it can carve out another utensil from a block of wood.

His first steps towards sharpening the spoon tool don’t go so well. After heating the metal spoon in a forge and cooling it down in oil, Apollonov realizes that he should have shaped it beforehand. However, he’s already gone too far filing the spoon, so he just finishes sharpening the metal spoon and gets to scooping out a shallow bowl into the center of the wooden spoon.

Apollonov now has to cut out the spoon shape from a rectangular block of wood. To do this, he sharpens the handle of his metal spoon using the same heat, cool, and file method he has used to sharpen the metal spoon’s head – only this time he’s learned his lesson and sharpens the handle before dropping it into the forge.

While most people would use a saw or a drill bit to cut out the spoon in minutes, Apollonov sticks to his self-imposed restriction and scoops out wood like it was the hardest ice cream at the bottom of the freezer.

Thanks to the power of video editing and the various spoon facts he gives out, time flies by rather quickly for us viewers. Apollonov, on the other hand, has to go through 3 hours of hard scooping in real-time without any comforting spoon facts to listen to.

After three hours of hand carving, he finally gets the rough shape of a spoon done. By now, you’ve probably noticed Apollonov hasn’t only been using a metal spoon to get things done. He’s already used a furnace, oil, and a hand file to get his metal spoon in shape, so what’s the harm in sanding his wooden spoon with some actual sandpaper?

Apollonov has actually tried sanding the wooden spoon with his metal spoon, but as luck would have it, it doesn’t work very well as a sanding tool. So to compensate for this and keep with his spoon restriction, he instead cuts a spoon-shaped piece of sandpaper and uses it to smoothen out his wooden spoon.

A quick montage to Lauri Värtinen’s guitar rendition of The Chordettes’ “Mr. Sandman” later (I would have preferred Julie Andrews’ “Spoonful of Sugar” – much more appropriate) and the wooden spoon is ready for final oiling before it can be used to a bowl of soup.

It definitely works. I mean, it’s a spoon – it can’t be that hard to get right. While Apollonov didn’t exactly make this spoon using only a spoon, the carving process (which is by far the hardest part) was done exclusively with a kitchen utensil.

Alex Apollonov does a bunch of crazy stuff on his YouTube channel I Did A Thing – a lot of which is soothingly narrated by himself and full of footage of him crafting stuff barefoot.