If you miss the joy of throwing quarters down a cheap arcade machine or working on a gigantic LEGO creation, then this unique project might fill both of those gaping holes from your youthful glory days.

LEGO creator Bre Burns’ love for arcade machines was so strong, she decided to make Benny’s Spaceship Adventure – a pinball machine made from over 15,000 LEGO bricks without any glue, screws, or fabrication (which makes it all the more impressive when you see it stand on its own)! 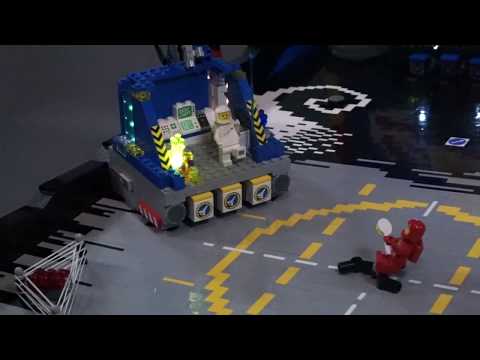 As for lighting and motors, Benny’s Spaceship Adventure includes seven sets of LEGO PowerFunctions lights, ten nine-volt PowerFunctions single-bulb lights, one nine-volt double-bulb flashing light, four M motors, and one XL motor. To make things even brighter, nine-volt fiber optics are included to give it an added flash. To provide the juice needed to power the machine, up to four PowerFuntions battery boxes or a plugged-in nine-volt LEGO Trains speed regulator will suffice.

But enough about the technicalities! Every single feature in this pinball machine is made from LEGO; right down to the pinballs, which are made from LEGO Mindstorms steel castor balls.

It has working bumpers which flick up to four balls onto the playing area, a coin dispenser, gumball dispenser, and of course, a ton of interactive obstacles the pinballs can navigate. Among others, these include collapsible targets, bumpers, multiball sensors – all of which contribute to an actual working scoreboard that tallies your pinball wizardry.

Bre spent around 200-300 hours designing, constructing, and programming her pinball machine before it was anywhere near functioning. She unveiled the first version of Benny’s Spaceship Adventure at the 2017 BrickCon before coming up with the current version and showing it off at this year’s Emerald City Comic Con (ECCC).

If you want to a more in-depth look, The Brothers Brick did an exclusive on Benny’s Spaceship Adventure which looks at the ins and outs of this nostalgia-churning machine. For more photos, head on over to the Renegade Bricks flickr page, which is run by Bre and her friend Jessie Robertson.